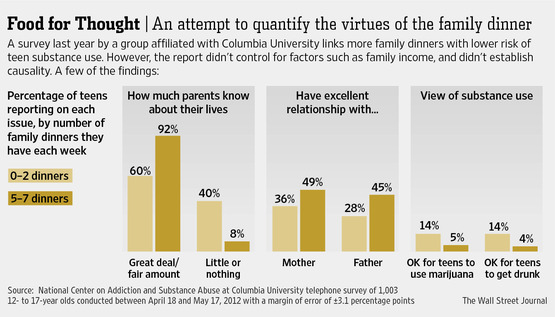 Food-fueled family gatherings at Thanksgiving undoubtedly are a boon for turkey farmers, football broadcasters and airlines. Do they also keep teenagers from using drugs and alcohol?

The role of family dinners in preventing substance abuse has become a surprisingly fertile field of research. For a decade, an organization affiliated with Columbia University has reported on the result of asking teenagers about how often they eat dinner with their families, as well as their use of, and attitudes toward, drugs, tobacco and alcohol. The surveys’ consistent finding, that the most frequent family diners are the least frequent drug abusers, has been trumpeted in many news articles touting the benefits of family meals.

The finding was satisfying to family-values advocates and, in the view of many, consistent with common sense. The idea that family dinners protect teens “conjures up Norman Rockwell images of families seated around the table together,” said Daniel P. Miller, assistant professor of human behavior at the Boston University School of Social Work. “It plays into what we think a family ought to look like.”

Some researchers, however, including Dr. Miller, were skeptical, wondering if other factors, such as a family’s income or parents’ weekly work hours, accounted for both the frequency of family meals and drug use. Or maybe, these researchers said, the conclusion that such dinners suppress drug use mixes up cause and effect: Teens out misbehaving with their friends might not get home in time for dinner, for example.

“I wanted to see if some of the findings still held up if we took a more careful look at it,” said Dr. Miller.

Last year, he and some colleagues tapped into a data set that allowed them to isolate the role of family dinners more precisely. A federal survey tracked more than 21,000 American children, many for nearly a decade. While researchers didn’t directly measure drug use, they could check whether more family meals were linked with fewer behavioral problems after controlling for other factors—and which caused which. And they found that family-meal frequency had little or no effect on academic or behavioral results.

Another paper published last year more directly addressed the link with drug use. Using a different federal study of teenagers, Kelly Musick and Ann Meier found that changes in teens’ frequency of family dinners at one time didn’t predict changes in their substance abuse at a later time, after controlling for other changes in the family environment.

Prof. Musick, a sociologist at Cornell University, though cautious about the value of dinners in reducing drug use, did point to evidence from the study of other benefits, such as reducing teens’ depressive symptoms. “Something about dinners hangs in, albeit less than would be suggested by prior work,” she said.

Dr. Miller agreed that family meals are valuable even if they don’t by themselves curb drug abuse. “They might not be important in the way we typically talk about them, but that doesn’t mean they don’t have all sorts of benefits,” he said.

The National Center on Addiction and Substance Abuse, the Columbia-affiliated organization known as CASAColumbia that helped publicize family dinners’ potential to curb drug use with its first paper on the topic in 2003, has released eight reports in all, the most recent one last September. While that contained a statement from the group’s founder that “frequent family dinners make a big difference,” the rest of the report is more cautious, noting for the first time that “the data cannot be used to establish causality.”

“At the suggestion of advisers we spelled it out in clean, clear English,” said Emily Feinstein, senior policy analyst at CASA and author of last year’s report.

CASA is now exiting the field, Ms. Feinstein said, though it may continue to mark Family Day each year, a day when families have been encouraged to eat together since 2001. “We have been covering most of the points that could be covered, and have done it well,” she said. “We’re evolving.”

I first wrote about the CASA surveys in 2005, my first year writing this column. Since then, as CASA and the field has evolved, so has the Numbers Guy column: from online-only to twice-monthly in Marketplace, then to the A section, and most recently to its weekly home in U.S. News.

The column will continue to evolve, under a new byline: This is my last one before heading for a new data-driven project. I am deeply grateful to former WSJ.com managing editor Bill Grueskin for conceiving of the column, and to my many astute colleagues and readers—top-notch numbers people, all—who were indispensable to making it work with their wise ideas and feedback.   Article Link…