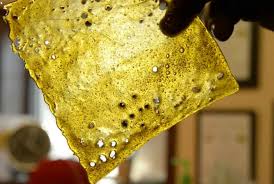 David Murray, Senior Fellow at the Hudson Institute, joined Anna Kooiman on “Fox and Friends Weekend” to share some insight on the dangerous new drugs that people are experimenting with across the country.

Perhaps the fastest-growing, “flakka” is a new synthetic designer drug with amphetamine-like qualities. It’s made from the same chemical as bath salts and it causes high temperature and hallucinations, Murray revealed.

Police in Florida say there are a growing number of cases of bizarre and uncontrollablebehavior linked to people using flakka.

“It produces intense effects of stimulation, of adrenal-like consequences for your heart, for blood pressure,” Murray explained.

Murray said another new substance called “shatter” is highly-concentrated marijuana. It’s made in a lab and is six-times stronger than the average marijuana bud, with levels of THC that can reach 70 to 90 percent.

“This is a neurotoxin and it causes psychosis,” Murray stated, explaining that shatter is legal in Colorado, and it’s currently being smuggled to other states.

Lastly, Murray revealed that fentanyl, which is up to 50 times more powerful than heroin, is being diverted from its legal use in medicine to criminal labs.

“This drug is so potent, first responders are told, ‘Don’t even touch it. It can be absorbed through the skin. Don’t inhale it,'” Murray said. “It leads to respiratory arrest. It’s killing people deader than a hammer right away.” Article Link…