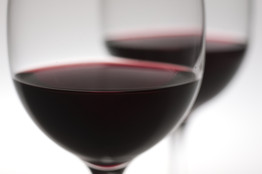 Recent headlines have made alcohol seem almost like a health food: “Alcohol Can Be Good for the Heart…” or “Another Reason to Drink Red Wine.”

But evidence is mounting of a more insidious threat: Regularly drinking, even in moderation, raises the long-term risk of many kinds of cancer.

A burgeoning body of research links alcohol to cancers of the breast, liver, colon, pancreas, mouth, throat, larynx and esophagus. A large new study last week added lung cancer to the list—even for people who have never smoked cigarettes.

For some of these cancers, such as lung, larynx and colorectal, the cancer risk only sets in when people drink heavily—three or four drinks a day on a regular basis. But just one drink a day raises the risk for cancers of the mouth and esophagus, several studies show.

And the risk of breast cancer starts to rise with as few as three drinks a week, according to the U.K.’s Million Women Study, one of more than 100 studies linking alcohol consumption and breast cancer.

For most cancers, the risks rise steadily the more alcohol people consume regularly. Overall, men who drink three or more drinks a day have a 41% increased risk of dying of any kind of cancer, and women raise their risk 20% by drinking two or more drinks a day, according to an analysis of U.S. government surveys published in this month’s American Journal of Epidemiology.

“The situation is somewhat similar to tobacco a few decades ago,” with drinking deeply rooted in social habits and promoted in advertising and movies, says Paolo Boffetta, director of the Institute for Translational Epidemiology at Mount Sinai School of Medicine in New York.

Much of the data linking alcohol and cancer comes from observational studies that can show correlations, not cause and effect. But the sheer volume of such studies—going back decades and including tens of millions of participants—provides compelling evidence that alcohol is causing additional cancers, particularly of the head and neck, liver, colon and breast, epidemiologists say.

Scientists are pinpointing a variety of ways that alcohol can cause cancer—from raising estrogen levels to activating harmful chemicals in tobacco to damaging DNA and interfering with its repair.

And public-health officials are urging primary-care doctors to be far more vigilant in asking patients about their drinking habits and letting them know that chronic alcohol consumption can be harming their health, even if they never binge or get drunk.

“Cancer doesn’t happen overnight,” says Samir Zakhari, director of the division of metabolism and health effects at the National Institute on Alcohol Abuse and Alcoholism. “It’s the repeated exposure to alcohol over a long period of time that will cause damage and it has a cumulative effect.”

“You could ask, ‘Why drink alcohol at all?’ The challenge is that moderate drinking reduces the risk of heart attacks,” says Graham Colditz, associate director for prevention at the Siteman Cancer Center at Washington University School of Medicine in St. Louis.

One study found that men who consumed eight to 14 drinks a week had a 59% lower risk of heart failure compared with those who didn’t drink.

But experts warn that regularly drinking more than that can cause cardiovascular damage instead, raising blood pressure, increasing the risk of hemorrhagic stroke and leading to cardiomyopathy, a dangerous enlargement of the heart.

“The trick here is to adhere to moderate drinking. People who think that if one drink is good, more must be better, are getting the opposite results,” says Dr. Zakhari.

Alcohol is most strongly associated with cancers of the mouth, throat, larynx and esophagus. Many regular drinkers also smoke cigarettes, which multiplies the risks, researchers say.

Some studies of lung cancer have shown that the disease was mostly attributable to smoking, not drinking. But the study presented at the American College of Chest Physicians last week, analyzing records for 126,293 patients in the Kaiser Permanente health system in Oakland, Calif., found that those who drank three or more drinks a day had a 30% to 40% higher risk of lung cancer, regardless of their smoking history.

“Never smokers, passive smokers, people who stopped smoking and current smokers—they all had increased risk for lung cancer, if they were heavy drinkers,” says Stanton Siu, Kaiser Permanente’s chief of pulmonary and critical care and the lead investigator.

Such epidemiological studies do have limitations: Many rely on subjects to accurately report how much they drink and how frequently, and many aren’t set up to monitor how drinking habits change over the years, so pinpointing exactly how much alcohol causes how much risk is difficult.

Dr. Zakhari gives the example of a woman who drank heavily in college, then drank only one drink a week in later years and developed breast cancer.

“An epidemiological study could say that one-seventh of a drink a day causes breast cancer. But the cancer might have been initiated when she was drinking heavily in college, or she might have gotten cancer anyway even if she didn’t drink,” Dr. Zakhari says.

Still, alcohol seems to affect breast-cancer risk at many stages of life: Girls aged 9 to 15 who drink three to five drinks a week have three times the risk of developing benign breast lumps, which can lead to cancer, according to a study by Dr. Colditz in Pediatrics last year. Experts also estimate that the risk of breast cancer rises another 10% for each additional drink women regularly have a day.

Many unanswered questions remain. Study results have been mixed about whether some kinds of alcohol promote cancer more than others. (The Kaiser study found the strongest link with beer.) Researchers are still exploring the role of drinking patterns.

The analysis of U.S. cancer deaths found that the quantity of alcohol mattered more for men’s overall cancer risk while frequency of drinking was more meaningful for women. It’s also unclear how long it takes for the excess risk to diminish once drinkers cut down.

Canada’s Centre for Addiction and Mental Health found that the risk of head and neck cancer only returned to normal levels after 20 years, according to a study in the International Journal of Cancer in 2007.

Like so much else in medicine, the pros and cons of drinking may be highly individual, depending on family history and other health risks.

Some people are strongly urged not to drink at all—including women who are pregnant or trying to conceive, recovering alcoholics, people taking certain medications, people about to drive and those who are under 21.

For everyone else, the standard advice still makes sense. As Dr. Colditz says, “If you drink, drink no more than one drink a day for women and one to two for men to maximize the potential benefit for heart disease, and avoid too much increase in cancer risk.”