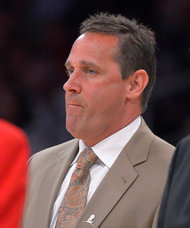 MINNEAPOLIS (AP) — It was 1984, the night before the biggest game of his college career, and Bill Bayno, a junior forward at Sacred Heart, was sitting quietly in the hotel bar.

An assistant and a group of boosters with American International College — Sacred Heart’s opponent in an N.C.A.A. Division II regional semifinal the next day — were at the bar as well, and they recognized Bayno, a future all-American. A smile crept across Bayno’s face as the drinks kept coming.

“They were thinking, Let’s get Bayno drunk,” he said.

Everyone knew Bayno could play. He was a starter after transferring from Massachusetts, a confident, do-everything kind of player who was a key to the Pioneers’ chances against the future N.B.A. standout Mario Elie and American International. What those boosters didn’t know was that Bayno could also drink.

“I probably had seven or eight drinks, and the next day, we went out and won the game and I had a really good game because I was so used to doing that,” said Bayno, who had 13 points, 8 rebounds and 2 steals in the 72-69, double-overtime victory. “I didn’t overdo it. A normal night for me was 20 or 30 drinks.”

Bayno had normal nights like that through the rest of his playing career, and they followed him into coaching. Somehow, he was always able to manage it. He worked under P. J. Carlesimo at Seton Hall and Larry Brown at Kansas, and helped John Calipari resurrect the program at UMass. It was not until he was a hotshot 32-year-old hired to get Nevada-Las Vegas back on the national map that it really started to catch up to him.

Now an assistant with the Minnesota Timberwolves, the 50-year-old Bayno has been sober for nearly 11 years. He had to go through two minor leagues in the United States and a league in the Philippines to re-establish himself, and he has spent that time also searching for a little more balance in a life that was sometimes consumed by the game.

“Going through the experiences I’ve gone through has helped me to continue to grow as a person and help find that peace,” Bayno said. “That’s what we’re all looking for, peace of mind, and to be happy with who we are and where we are and our jobs.”

Winning was never a problem for Bayno as a player or a coach. Sacred Heart twice made it to the Division II tournament, and he was 94-64 with two regular-season conference titles and two conference tournament titles in five seasons at U.N.L.V. The pressure of being in charge was something entirely different.

He honed his game on the streets of Newburgh, N.Y., near his hometown, Goshen, and said he once scored 53 points at Harlem’s famed Rucker Park while he was hung over.

“It’s something I always did,” he said. “Sweat it out and play. Even at the park. We would drink at the park and play ball and just sweat it out.”

When he transitioned to coaching, the alcohol helped him compensate for the anxiety and insomnia that plagued him while he obsessed over each game, each practice, each drill at U.N.L.V. Losses gnawed at him, and a bad practice would stay with him for days. That pent-up steam needed to be released some way.

It all started to unravel in 1999, his last full season at U.N.L.V. Bayno told himself he was not going to drink during the season, but U.N.L.V. suffered a tough loss to Oklahoma State on Dec. 18. A holiday break started Dec. 22, and Bayno was asked to join some friends for a late lunch after some Christmas shopping.

“Boom, we’re at lunch, a couple beers, a couple glasses of wine, and it turned into four in the morning, out all night,” he said.

He was fired the next season after a booster was charged with giving money to Lamar Odom, who never played a game for the Rebels. Bayno sought counseling, but said he was not able to stop drinking completely until May 25, 2002. It took him three years of wandering before he got a second chance from the Portland Trail Blazers executive and coach Kevin Pritchard, who was a point guard at Kansas when Bayno coached there.

“I knew a lot of people, but I also built up a reputation where people were probably afraid to hire me,” Bayno said. Article Link…