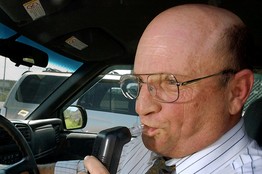 A decade from now, it’s possible your car will shut off the ignition when it detects that you’ve overindulged in alcohol, as WSJ’s Eyes on the Road column reports today.

One technology being considered for cars in the future takes a blood-alcohol levelthrough a fingertip sensor. Another would detect alcohol in the air when a would-be driver exhales.

Every U.S. state has passed a law that makes it illegal to drive with a blood-alcohol level of .08% or higher. As in many other countries, the rules tend to be tougher for younger drivers.

But it turns out the U.S. is relatively lenient on just what counts as too much, even though alcohol stubbornly remains a component in many fatal car crashes.

Beer-loving Germans and Belgians, for instance, are breaking the law if they drive with blood alcohol levels above .05.

In Sweden, the limit is .02 — which according to an online calculator I found would mean a 170-pound man could be over the limit after drinking two beers in an hour. In practice, Japanese drivers can’t have any alcohol in their bloodstream, according to a study by the National Highway Traffic Safety Administration, or NHTSA.

In these countries, drinkers have largely adapted to the tough rules, and rely on designated drivers or cabs to stay out of trouble.

So how do these blood-alcohol levels affect driving ability? Among an array of other symptoms, NHTSA notes the following:

-.02: A decline in visual function and ability to multitask

-.10: Ability to stay in one’s lane and brake at the right time is reduced