From throwing bongs, to bizarre methods of getting sober and tragic deaths, The Fix recaps the biggest Hollywood drug stories of the year. 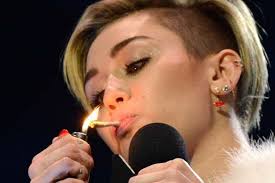 Two months after her controversial twerk-filled performance at the MTV Video Music Awards, Cyrus upped the ante even further in November by lighting a joint during her acceptance speech for Best Video at MTV’s European Music Awards in Amsterdam. “You know, I couldn’t fit this award in my bag, but I did find this,” she said before pulling out a joint, taking a few puffs and walking off the stage. MTV censored out her smoking during the actual broadcast and Cyrus later addressed the controversy by tweeting, “Sometimes in life you gotta just decide not to give AF.” She also admitted earlier this year that the reference to “Dancing with Molly” in her hit song “We Can’t Stop” is about the club drug; the word was also censored out of broadcasts during her VMA performance last summer.

Lady Gaga has long been a weed aficionado, as evidenced by her smoking a joint on stage during her 2012 concert in Amsterdam. But after suffering from a hip injury which eventually required surgery earlier this year, the singer admitted she was smoking 15 joints to help numb the pain. “I was just numbing, numbing, numbing myself then sleeping it off, then getting on stage, killing it in pain, then getting off and smoking, smoking, smoking, not knowing what the pain was,” she revealed. Gaga credits an unusual retreat with performance artist Marina Abramovic, which included being sent into the woods while blindfolded to help find her “way home,” with ultimately kicking her addiction. Although she admits to still smoking “a little bit at night,” Gaga said she is now the “soberest” she’s been in years.

Brooke Mueller’s ongoing drug problems have continued throughout 2013. The year started out well for Charlie Sheen’s ex after she scored a$250,000 settlement against Malibu rehab The Canyon, which she accused of selling private medical information to the media while she was being treated for substance abuse in February 2010. But in May 2013, she was placed on an involuntary psychiatric hold and lost custody of her twin boys after child services feared her drug use could endanger them; after being released from the hold, she immediately entered rehab for the 20th time. Unfortunately, a disturbing video of Mueller smoking crack cocaine out of a pipe and scoring $1,500 worth of crystal meth went viral last September. Read more…