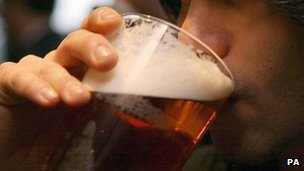 Pub landlords in Wales back the introduction of a minimum price per unit of alcohol, a new study claims.

Alcohol Concern Cymru said its research found 77% of those questioned in support, and most blamed cheap supermarket drink for a fall in trade.

The UK government is proposing introducing a minimum price of 40p per unit for Wales and England, while in Scotland 45p per unit is being debated.

Many pub landlords in Wales would back a price of 50p a unit, the survey found.

About 600 landlords took part in the survey, with almost half of them, 48%, saying their sales had dropped in the last year and and 61% saying they expected that to continue over the next 12 months.

Of those surveyed, 94% said they thought cheap alcohol sold in supermarkets played a part in the decline of sales, with a majority, 56%, citing this as the main reason.

A total of 91% said they thought supermarket promotions of cheap alcohol were “hypocritical” when pub landlords felt tightly controlled.