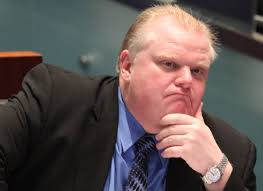 Toronto Mayor Rob Ford is taking a leave of absence to seek professional help for his alcohol problem, he said Wednesday, as new images emerged showing the politician smoking what appears to be crack cocaine.

The images – obtained by Toronto’s Globe and Mail newspaper, as well as the website Gawker – come from a video surreptitiously shot by a self-professed drug dealer. Ford can be seen gesturing in the images, which mark another public sideshow in Ford’s leadership of a city with more than 2.5 million residents.

New audio has also emerged, reputedly featuring Ford ranting and cursing while at a bar. That audio was obtained by the Toronto Sun.

Ford, 44, who is seeking re-election in the Oct. 27 vote, said he will take an immediate leave from his job and his campaign.

“It’s not easy to be vulnerable and this is one of the most difficult times in my life,” Ford said in a statement. “I have a problem with alcohol, and the choices I have made while under the influence. I have struggled with this for some time.”

News reports of the existence of an earlier video of Ford apparently smoking crack first surfaced last May. While that video has never publicly emerged, Ford later admitted after months of denials that he smoked crack in a “drunken stupor.”

Other scandals have followed, one after the next. Public drunkenness. Bizarre rants. Through it all – and even after Toronto’s city council stripped him of most of his powers – Ford has refused to resign.

Ford acknowledged “rocky moments over the past year” during his official campaign launch last month but vowed to fight harder than ever to win re-election.

While Ford became a punch line because of his antics, the joking has made way for concern. Comedian Jimmy Kimmel, who invited Ford onto his late-night program in February, expressed wishes that Ford receives help for his addiction issues.

“All jokes aside, I hope [Ford] really does get the help he obviously needs,” he wrote on Twitter Wednesday. Article Link…