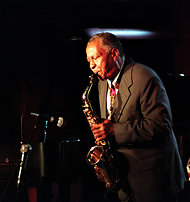 Stark shadows. Empty streets. A lone figure clutching a horn. The conventions for depicting a hard-boiled jazz hero have been firmly established for decades, in fiction and in film. The implicit toll of the music, according to this code — a clutch of obsession, leading to one or another form of ruination — would register as hollow cliché were it not for the exception that proves the rule. Somebody like Frank Morgan.

Mr. Morgan, who died in 2007 at 73, was an alto saxophonist with a quiet but penetrating sound, limpid and centered and beautifully personal. As a shining up-and-comer in Los Angeles, he followed in the footsteps of bebop’s paragon, Charlie Parker, right down to a narcotics addiction that had him in and out of prison (but mostly in) for 30 years. His comeback, which began with the release of his second album in 1985, added a grace note to a career that courted tragedy at every turn.

His story and sound have inspired many listeners over the years, none more demonstrably than the author Michael Connelly. In the best-selling series of crime novels that established his reputation, Mr. Connelly has used Mr. Morgan’s music as a leitmotif for his hero, the Los Angeles police detective Harry Bosch. Now, in a more direct tribute, Mr. Connelly is the executive producer of a forthcoming documentary film, “Sound of Redemption: The Frank Morgan Project,” that aims to shed light on Mr. Morgan’s resilience as well as his hardship.

“I’m a disciple of Raymond Chandler, who said in his essays that there’s a quality of redemption in anything that can be called art,” Mr. Connelly said last week. Speaking by phone from Los Angeles, where he was putting the finishing touch on his latest Harry Bosch novel, “The Black Box,” he characterized the film as a bit of unfinished business.

Five years ago — not long after he dropped Mr. Morgan’s name in the opening scene of “The Overlook,” a Bosch novel originally serialized in The New York Times Magazine — he appeared with Mr. Morgan at the Berklee College of Music in Boston, in a talk about the relationship between words and music. “I’ve been on 20 book tours, I’ve been on a lot of stages, and that was the single best thing I ever did,” Mr. Connelly said.

At dinner afterward, Mr. Morgan suggested that they arrange a series of similar appearances at other college jazz programs across the country to reach more aspiring musicians. They agreed to pursue the idea after fulfilling some other obligations, including a video teaser for “The Overlook,” with a solo-saxophone score. But then Mr. Morgan’s health declined precipitously. He died months later of colon cancer, and Mr. Connelly began to think about how to tell his story.

That story, with its path from hopeful prodigy to grateful prodigal, certainly offers no shortage of drama. Born in Minneapolis, Mr. Morgan started his musical training on guitar, his father’s instrument, but changed course at age 7 after seeing Parker in Jay McShann’s band. By the time he was 15, having moved with his father to Los Angeles, Mr. Morgan was working the nightclubs on Central Avenue; by 17 he was using heroin. Many of his subsequent years were spent in places like San Quentin, where he played in a prison jazz combo with his fellow alto saxophonist and inveterate addict Art Pepper.

Mr. Morgan would later recall his slide into addiction and felony — forgeries, fraud and robbery — with all the weary fatalism of a figure out of crime fiction. In an interview with Gary Giddins, published just after his debut at the Village Vanguard in 1986, he said, “I knew enough about heroin to know that it was certain failure — that if anything would ensure failure, becoming a heroin addict would be it.” He had already been in prison by the time he made his first, self-titled album, in 1955.

His second album — wryly titled “Easy Living” and released 30 years later — rippled through a jazz world obsessed at the time with vintage modes of playing, bebop chief among them.

Mr. Morgan was an emissary from a lost world, with a cautionary tale evocative enough to generate mainstream coverage. It was through a profile in a newsmagazine that Mr. Connelly, then a crime reporter for The Los Angeles Times, first heard about Mr. Morgan. Mr. Connelly went to hear him at a club and felt a connection, though he had always regarded jazz as his father’s music.

As it happened, Mr. Connelly was working on what would become his first novel, “The Black Echo,” and in Mr. Morgan he felt he had found a muse. Being a writer who describes his process as “filmic,” Mr. Connelly was responding on some level to cinematic portrayals of crime fiction, from the film noir era and beyond. He has a special reverence for the scene in the 1974 film “The Conversation” that depicts Gene Hackman’s character — an outsider working inside the system, first name Harry — playing tenor saxophone along to a record in his existentially lonely apartment.

Mr. Connelly fixated on one performance by Mr. Morgan, from the 1989 album “Mood Indigo,” as Harry Bosch’s theme. “For some reason that song ‘Lullaby,’ I played it like raising the flag every day,” he said. “It would drop me into Harry Bosch mode, for lack of a better description. It would help me do what I do, in playing the keyboard I play.” In the 2003 novel “Lost Light,” one scene actually finds Bosch attempting to play “Lullaby” on the saxophone: “The song wasn’t even a minute-and-a-half long,” he muses, “but to me it said all that ever needed to be said about being alone in the world.”

The idea of a film, which Mr. Connelly began exploring soon after Mr. Morgan’s death, finally began to move forward after he saw “Kimjongilia,” a 2009 documentary by N. C. Heikin, the wife of his longtime French translator. Ms. Heikin agreed to sign on as director, shooting interviews and other footage with Mr. Connelly’s help. The film has aKickstarter page, with a goal of $60,000. More than $46,000 was raised by Tuesday, with 10 days to go.

The Kickstarter funds will go toward licensing fees and other costs, including filming at San Quentin, where a tribute band — featuring Mr. Morgan’s former pianist, George Cables, and one of his protégés, the 20-year-old alto saxophonist Grace Kelly — was recently cleared to perform. If all goes according to plan, the film will be released next year.

At this stage it is impossible to know how deftly it will deal with the melodrama in Mr. Morgan’s story. In any case, it will be another form of tribute from Mr. Connelly, and Mr. Morgan will have about as much to say about it as he did about the Bosch series. “He would always say he was told about them,” Mr. Connelly said. “But I’m pretty sure he never read the books.”