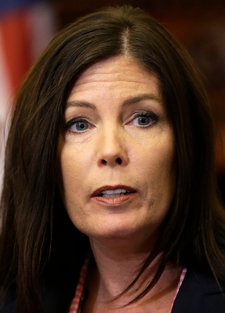 Pennsylvania officials warned residents on Monday about a dangerous batch of heroin that has caused 22 deaths.

The state’s attorney general, Kathleen G. Kane, said that the overdose deaths were most likely caused by a mix of heroin and fentanyl, a strong pain medicine.

“Together, these drugs are creating an extremely dangerous and potentially lethal combination for users,” Ms. Kane said in a statement.

The deaths occurred in Pittsburgh and several surrounding counties, officials said. The heroin was placed in small bags stamped with the words Theraflu, Bud Ice and Income Tax.

The Allegheny County medical examiner’s office in Pittsburgh reported on Friday that three people had died from overdoses of a strong form of heroin in 48 hours. The number of deaths continued to rise over the weekend.

Mayor William Peduto of Pittsburgh warned residents about the deadly heroin on Saturday after four more overdoses and another fatality in the city.

“Those who are in possession of this potent formula are in danger of losing their lives,” he said. “It will kill you. The danger cannot be overstated.”

Mr. Peduto told a local television station that the outbreak was not just an urban problem.

“Heroin doesn’t pick and choose by class or by race,” he said. “If somebody has an addictive personality and they get into heroin, then they’re stuck.”

The attorney general’s office said the police were working to remove the deadly heroin from the streets and to arrest anyone caught selling or producing the drug. The stamped bags were found in Allegheny, Armstrong, Beaver, Butler, Lawrence and Westmoreland Counties in the western part of the state, and Ms. Kane said the drugs could be moving across the rest of Pennsylvania.

The medical examiner’s office released photos of the heroin bags, marked “Theraflu” in red to show residents what to look out for. The office said the people who had died from overdoses all had a history of drug abuse, according to The Associated Press.

Fentanyl is a powerful painkiller similar to morphine, but more potent, according to the National Institute on Drug Abuse. When it is mixed with heroin or cocaine, it amplifies their strength and can cause respiratory problems, nausea and sedation. Article Link…