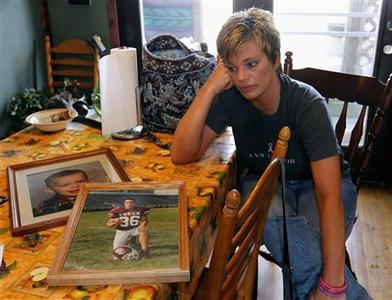 Back in high school in Houston, Texas, C.J. Coomer got good grades and played football. He was dark-haired and handsome, popular with his friends and doted on by his family.

But when his mother got divorced and moved to be near family in rural Scott County, Indiana, Coomer began running with a crowd there that abused prescription painkillers to get high. His weight dropped from 210 pounds to just 140 pounds (64 kg), he couldn’t work, and was constantly borrowing money.

One night last July, Coomer tried something new — Opana, a powerful opioid painkiller containing oxymorphone. He overdosed and died at the age of 24.

“It’s a nightmare every single day,” said his mother, Melissa Himmelheber, 43, who wiped away tears as she showed pictures of her lost son. “This is a family that was extremely close. Now we’re just picking up the shattered pieces.”

Prescription drug abuse is the new scourge of rural America. It now leads to more deaths in the United States than heroin and cocaine combined, and rural residents are nearly twice as likely to overdose on pills than people in big cities, according to the Centers for Disease Control.

While methamphetamine addiction has long been associated with small towns, prescription painkillers have overtaken meth as the most abused drugs in places such as southern Indiana, according to local authorities.

Opana is the hot new prescription drug of abuse, sometimes with tragic consequences.

At least nine people have died so far this year from prescription drug overdoses in Scott County, Indiana. Most of the fatalities involved Opana, according to county coroner Kevin Collins.

Before 2011, only about 20 percent of the cases referred to the coroner were overdose deaths, and most of those were suicides rather than accidents. Last year, prescription drug overdoses accounted for 19 deaths, or about half of all deaths referred to the coroner in this county of just 24,000 on the southern tip of Indiana, about 30 miles from Louisville, Kentucky.

“We’re seeing a lot of 25-year-olds who are dead for no apparent reason,” said Collins, who is so disheartened by the overdoses that it is one reason he won’t run for reelection in May.

Law enforcement officials are alarmed by the rise of Opana abuse, which they said started after Oxycontin was changed in late 2010 to make that drug more difficult to snort or inject for a heroin-like high. Oxycontin is a brand of oxycodone.

Opana abuse can be deadly because it is more potent, per milligram, than Oxycontin, and users who are not familiar with how strong it is may be vulnerable to overdosing.

Opana, known by such street names as “stop signs,” “the O bomb,” and “new blues,” is crushed and either snorted or injected. Crushing defeats the pill’s “extended release” design, releasing the drug all at once.

“This Opana pill has really kicked us in the rear,” said Indiana State Police Sergeant Jerry Goodin. “We’ve never seen an addiction like this.”

Oxycontin’s new pills make it harder to crush them into a powder as they instead become gummy and cannot be readily snorted or injected. This drove abusers to switch to Opana or to generic, immediate-release forms of oxycodone, according to John Burke, president of the National Association of Drug Diversion Investigators. Drug abuse experts have also found an increase in heroin use.

Endo Pharmaceuticals, which produces Opana, announced in December that it would reformulate Opana. The new pill is being manufactured now.

The new formulation makes it difficult to crush and it turns viscous or “gooey” if an abuser tries to add liquid to it, said company spokesman Kevin Wiggins. When used properly, Opana is indicated for chronic low back and osteoarthritis pain, and cancer pain.

But the old form of Opana is still available, and pharmacy and home robberies are on the rise as addicts search for a way to get their fix, according to police.

“We’re pretty much consumed by it,” Shane McHenry, a detective with the Dearborn County Sheriff’s Department in southern Indiana, said of Opana. He said users who cannot afford Opana sometimes travel to Cincinnati to get heroin, which is cheaper in smaller amounts.

Fort Wayne, Indiana reported about 11 pharmacy robberies related to Opana since Endo announced the reformulation, according to Fort Wayne police spokeswoman Raquel Foster. The thief would hand the pharmacist a note, as in a bank robbery, threatening harm if Opana was not delivered.

The Opana problem has been reported by abuse experts around the country. In Florida, for example, the number of oxymorphone-related deaths rose to 493 in 2010, an increase of 109 percent from the previous year, according to Jim Hall, director of a drug abuse center at Nova Southeastern University in Florida.

Some users and dealers get painkillers from so-called “pill mills” — storefront pain clinics that sell drugs for cash up front, often to out of-state buyers who take them for resale.

But the other way users get pills is from their doctors, or by buying from seniors looking to supplement a fixed income. One Opana pill brings up to $90 on the street depending on dosage, so it is tempting to sell, said Scott County Sheriff Dan McClain.

A woman in her late 70s was arrested in Austin, Indiana for exchanging pills for work around her house, McClain said.

“Most of what I see is people with a prescription from their doctors and they need the money,” said Austin, Indiana Police Detective Lonnie Noble. He said the appetite for Opana is “more aggressive” than it was for Oxycontin.

Nashville, Tennessee Detective Michael Donaldson, who also has seen an increase in Opana abuse, said many small towns have “dirty doctors” willing to give out unneeded prescriptions.

Scott County is one of the poorest areas in Indiana, with a median household income of $39,588 in 2010. It was a hot spot for oxycodone retail distribution in 2010, with 48.79 per capita dosage units — the highest in the state, according to Lori Croasdell, a coordinator for CEASe of Scott County, a drug abuse prevention group.

A northern section of Austin in Scott County showed signs of poverty and neglect. Run-down trailers and houses with broken windows and peeling paint were mixed in among well-kept homes and tidy gardens.

McClain said the drugs cause a vicious cycle of poverty, since abusers cannot hold a job. “Most of them sleep until noon, get up, and try to find a way to get another pill,” said McClain.

One reason for the rise in prescription pill abuse is that Americans feel they can fix any problem – pain, depression, anxiety, hopelessness – with a pill, according to Shane Avery, a Scott County doctor. And some doctors, who may mean well but fear being sued for undertreating pain, give out pills better suited for cancer patients to soothe a backache, Avery said.