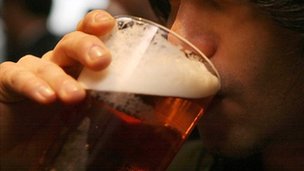 Martin was first treated for alcoholism in his early 20s. After receiving treatment, he got his life back on track and went on to establish a life “beyond his wildest dreams” with his partner.

“We had our own home in the countryside, nice gardens, a Range Rover jeep, she had her own car, we had a little pet dog, gravel driveway, a healthy bank account, the wedding almost sorted out, honeymoon paid for,” he said.

“Looking back on it, I had respect from people, genuine respect, and for me to be younger than most of the people I was doing business with. Life couldn’t have got any better.”

After being teetotal for four years Martin, from Omagh in County Tyrone, said he took his “eye off the ball”.

“I said to myself I was smart enough to do it for four years completely sober, sure a few drinks won’t do much harm now, and that was the biggest mistake I made,” he said.

“To be honest, at the time I was starting to make excuses, at the start my partner overlooked it but then it was the case there was arguments at home.

I said to myself I was smart enough to do it for four years completely sober, sure a few drinks won’t do much harm now, and that was the biggest mistake I made”

“She was moving out of the house and called the wedding off.”

Around the same time, his business, selling cars and vans, began to suffer too.

“I couldn’t keep up with the bills, loans, overdrafts, everything was there and it was all going to the wayside. So there was a whole lot of stuff snowballed at the end of 2012 where it was just a case where I needed drink each day to kind of blank it out not to take the phone calls,” he said.

“I had no interest in going in to work, I was missing deals and also I was selling stuff under price because I hadn’t got the interest, the drive wasn’t there anymore.”

As time went on, his financial pressures mounted.

“Inside the space of four months bills weren’t being honoured. I’m not talking about a phone bill for £50, you were talking £500, £1,000, £8,000, another for £4,500 on credit cards and that, so as soon as the drink took over, it came in very rapid on my life at every point and the financial strain was the biggest one and then the relationship was the other strain,” he said.

Having reached rock bottom, Martin decided to seek help. He is currently receiving treatment at Ramona House in Omagh, which provides accommodation and treatment for men and women with alcohol-related issues.

“I couldn’t have dealt with everything that was going on on my own, so I would genuinely say this place has really started to build my life back up again.”

He said anyone from any walk of life could find themselves in his situation and urged them to seek help.

“What I would say is that having a problem with drink it’s not the stereotypical type that people perceive of a person drinking out of a brown bag under the bridge,” he said.

If you have a problem with drink, I would just say swallow your pride, forget about what people think, pick up the phone and chat to someone because there’s a much better life out there”

“It has absolutely nothing to do with your background, what you work at, what you have in your bank account. If you have a problem with drink, I would just say swallow your pride, forget about what people think, pick up the phone and chat to someone because there’s a much better life out there.”

Martin is now studying and hopes to train as a solicitor.

The unit in which he lives is run by one of four organisations in Northern Ireland which are receiving £3.5m from the Big Lottery Fund to tackle alcohol abuse.

The Big Lottery Fund said Northern Ireland had a higher proportion of alcohol-related deaths than the rest of the UK. Article Link…