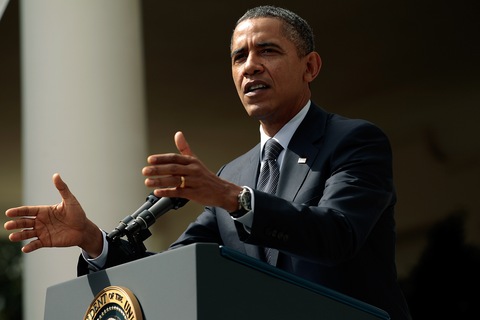 President Obama’s new strategy to curb drug abuse takes the focus off of prison and puts it on treatment.

In the plan released today, the Obama administration says that the “mass incarceration” of nonviolent drug users is an “outdated” policy. Instead, the White House says it is spending resources on preventing people from using drugs in the first place and helping users recover, because “drug addiction is a disease.”

The administration also repeats, to the chagrin of advocates who have for years sought to make marijuana legal, that “legalization of drugs will not be considered.”

Obama’s drug czar, Gil Kerlikowske, told ABC News that Obama is “firm” on not favoring the legalization of illicit drugs, even as the new approach eases up on arrests of people who use drugs.

The strategy also seeks to bring attention to the abuse of prescription drugs, not just illegal substances that are brought  across the southern border. Kerlikowske said the administration will educate people on how to “clean out their medicine cabinet” and that it will “crack down on pill mills,” clinics that have sold drugs like Oxycodone.

The strategy aims to cut down on prison costs. Kerlikowske said around $9 billion in the federal budget is spent on domestic law enforcement related to drugs, and the goal is to lower that. But the administration wants to continue spending around $10 billion on prevention and treatment.

“We’re seeing not only alternatives to incarceration, but recognition that treatment for people who are incarcerated and have a drug problem is really critical,” Kerlikowske said.

Since Obama took office, he and his drug advisers have sought to do away with the “war on drugs” terminology, arguing that the phrase is used by people who want to make drugs legal. Though the strategy presented today isn’t centered on legalization concerns, it is likely to be the focus in the media and among advocates.

Groups trying to legalize marijuana routinely garner massive support online, pressuring Obama when he takes town-hall questions from Twitter, for example, or when the White House announced an online petition process to evaluate the public’s ideas.

“The people that are involved in hoping to legalize drugs are very well funded,” he said. “They’re very organized, they have offices, they’re well supported, and with the push of a button, they can get as many signatures as they want, and we see that with a number of other special interest groups, so it’s not surprising.”