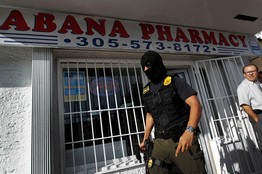 Two years ago, Florida was teeming with “pill mills”—pain clinics where doctors prescribed drugs like oxycodone with minimal medical evaluation and patients could fill orders on-site.

Addicts and dealers from across the eastern U.S. were drawn by the state’s lax regulations, and the epicenter was Broward County. “You would see 30 to 40 people lined up at a clinic,” said Richard Pisanti, a lieutenant with the county sheriff’s office. “People came faster than we could arrest them,” typically on drug possession or trafficking charges.

Some of the pill mills assumed the drab appearance of legitimate health-care practices, but others were clustered together in strip malls, with cars overflowing the parking lots. With names like “Dollar Medical,” the pill mills only accepted cash payments and consisted of little more than a table and a couple of chairs, law enforcement officials say.

Now, a year after Florida stepped up its battle against pill mills, the state can point to some notable successes. In 2010, 90 of the top 100 oxycodone-purchasing physicians in the country were in Florida, but that number dropped to 13 in 2011, according to Drug Enforcement Administration data. The number of pain clinics in the state has fallen 38% from its peak, according to the Florida Department of Health.

Yet Florida’s pill problem persists, as drug users and dealers adapt to the changing landscape and pill demand shifts to retail pharmacies and other establishments that appear to have been set up to skirt the new restrictions. Pharmacies are struggling to deal with the influx of customers who used to rely on pain clinics to get controlled drugs, said Michael Jackson, chief executive of the Florida Pharmacy Association. One of the most popular drugs is oxycodone, a narcotic that produces effects similar to morphine.

Gov. Rick Scott intensified the battle against pill mills last March, creating seven regional drug strike forces, composed of state and local law enforcement. As of mid-February, they had made 2,040 arrests, including 34 doctors, and forced 27 clinics to be closed, according to Mark Perez, special agent in charge at the Florida Department of Law Enforcement.

Then in July, a new law took effect that bars physicians, with a few exceptions, from dispensing controlled substances from their offices. That made Florida the latest of several states that have tightened rules on dispensing by physicians. Florida also tightened requirements for reporting dispensed pills to a state prescription-drug monitoring database. That database, which began to operate in September, tracks retail sales of controlled substances—information that, in theory, helps prevent individuals from amassing pills from numerous locations.

Meanwhile, prosecutions of prescription-drug cases have risen 42% since the new law went into effect, according to Attorney General Pam Bondi. And the Department of Health has accelerated the process to suspend the licenses of doctors suspected of over-prescribing painkillers, said state Surgeon General Frank Farmer.

But pharmacists now find themselves on the front lines of the pain-pill fight. The onus is on them to determine whether prescriptions are fraudulent or unnecessary—a difficult task given the lack of uniform guidelines on how pharmacists are supposed to evaluate prescriptions. “You have to rely on a pharmacist’s intuition,” said Mr. Jackson. “This is not a perfect science.”

Two years ago, Steven Nelson, owner of an independent pharmacy in Okeechobee, Fla., hardly ever turned away people seeking painkillers. Now, he said, he is rejecting “20 or 30 people” every week because they lack proper physician paperwork or they are from outside the region. He said he has handed over “dozens” of patient names to law enforcement, in cases where he suspected oxycodone addicts had forged prescriptions.

Mr. Nelson is worried that he could lose his license if he fills prescriptions that are fraudulent or if his customers turn around and sell the pills illegally.

CVS Caremark Corp., which owns two pharmacies in Sanford, Fla. under investigation by the Drug Enforcement Administration, says it has revised guidelines for dispensing pain medications. Included are specific instances when a pharmacist should be suspicious, such as when a patient requests a drug with slang terms like “M’s” or “the blue pill,” according to a CVS declaration in the DEA case filed last month. One of the pharmacies under investigation now declines prescriptions for patients with “pinpoint pupils,” according to the CVS declaration.

Mr. Perez, of the state’s law enforcement department, said authorities are also trying to figure out whether unscrupulous operators are behind an increase in applications for new pharmacies. Another source of worry: Law-enforcement reports new establishments are exploiting legal loopholes to set up side businesses prescribing painkillers, Mr. Perez said. The new venues are trying to mimic the look of legitimate operations by opening up as weight-loss centers and wellness clinics, law enforcement officials say.

“The drug trade is a for-profit industry,” Mr. Perez said, “so they’ll look at other areas they can take advantage of.”

Bob Gualtieri, sheriff of Pinellas County, Fla., said the number of forged prescriptions is rising in his area. Despite the crackdown on suppliers, the local price for a pill of oxycodone has remained constant, about $17 a pill, indicating supply and demand haven’t changed significantly, he said. He said he has noticed several new wellness and walk-in clinics open up in the area. “At the ground level, we’re still seeing a big problem,” he said.