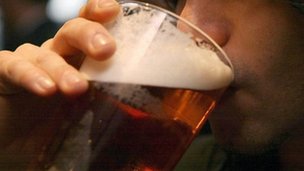 In a letter to the Daily Telegraph, 9 experts said Scottish plans for minimum pricing were a “simple and effective” way to tackle alcohol-related deaths.

They called for an end to so-called “pocket-money prices” ahead of a debate by MPs later on alcohol taxation.

The Department for Health said it was due to launch a new “alcohol strategy”.

The group of leading experts said alcohol was linked to 13,000 new cases of cancer each year and associated with one in four deaths of people in the 15-to-24 age group.

It said: “We need to narrow the price gap between alcohol bought in bars and restaurants with alcohol bought in supermarkets and off-licences, to make bulk discounts and pocket-money prices a thing of the past.”

“We urgently need to raise the price of cheap drink,” it states because of a “wealth of evidence” linking the cost of alcohol and levels of harm.

If the coalition is not ready for the “bold action” of minimum pricing, it says MPs must not “lose sight” of taxation as a tool to lower drinking levels.

The coalition has introduced a ban on the sale of alcohol for less than cost price, which will come into force in England and Wales in April 2012.

In November, the Scottish government made a second bid to bring in legislation which will set a minimum price for a unit of alcohol. It has already put in place a ban on “irresponsible” drinks promotions.

Professor Sir Ian Gilmore, special adviser to the Royal College of Physicians, said nearly 10,000 lives a year could be saved by a minimum price of 50p per alcohol unit.

He told the Telegraph that the government had acknowledged the importance of price by introducing a ban on selling alcohol below cost, but said this did not go “far enough”.