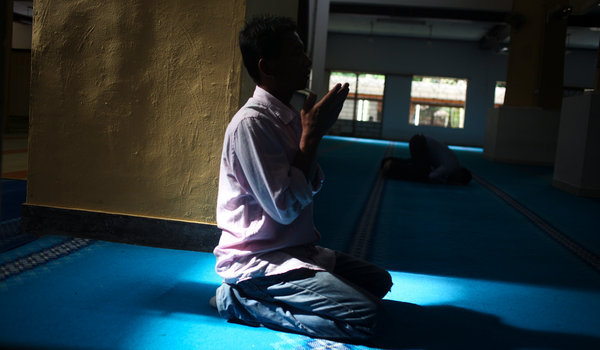 Every Monday and Thursday morning, the slightly built man rides the bus for an hour and a half from his home on the outskirts of Kuala Lumpur to the Ar-Rahman mosque.

After reciting his prayers, he climbs the stairs to the mosque’s mezzanine level, gives a urine sample and consults a doctor. A pharmacist then gives him a small plastic cup containing methadone, to help wean him from his heroin addiction.

The man, who did not want to be identified because of the stigma surrounding illicit drug use in the Muslim-majority country, said he had injected heroin for seven years before coming to the Ar-Rahman mosque about a year ago. “It makes me no longer take heroin on the street,” he said, referring to the methadone. “It makes me able to work.”

Some Muslim scholars believe that drugs that may prevent Muslims from carrying out their religious duties are forbidden under Islam, and Malaysia enforces strict laws, including the death penalty, for drug trafficking. Penalties for those found in possession of heroin include a fine, up to life in prison and whipping, depending on the amount.

But at Ar-Rahman mosque, doctors from the University of Malaya have succeeded in getting the religious authorities onboard in what the World Health Organization says is the world’s first methadone program operating out of a mosque. Doctors plan to expand the program to two more mosques in Kuala Lumpur in coming months.

Malaysia has an estimated 170,000 intravenous-drug users, with heroin the most commonly used drug. Opiate users accounted for about half of all drug users arrested in 2010, and the amount of heroin seized that year was the highest reported during the past five years, according to a recent report by the U.N. Office on Drugs and Crime. Most heroin in Malaysia is from Myanmar, Laos and west Asia, but some is also processed domestically, the report found.

While some countries have been using methadone to treat heroin addicts for decades, Malaysia introduced a nationwide government-financed program in 2005. Previously, the University of Malaya ran a program where patients had to pay for treatment. The success of that program, combined with the alarming spread of H.I.V. among intravenous drug users, prompted the government to introduce its own program with free dosages in 2005. Clean needle exchanges were introduced the following year.

Before the introduction of methadone, heroin addicts were sent to government rehabilitation centers for two years where they would go “cold turkey,” an approach doctors said led to a high relapse rate.

But while the number of methadone programs has expanded since 2005, a shortage of clinics with adequate space and facilities meant that many people who might have benefited from the treatment were still missing out, said Dr. Rusdi Abdul Rashid, chief coordinator of the University of Malaya’s Center of Addiction Sciences , which runs the Ar-Rahman program.

When doctors first approached the mosque authorities and the government departments of Islamic Development, which must approve activities in Malaysian mosques, they encountered strong opposition. The authorities feared that methadone was forbidden in Islam, Dr. Rusdi said. But the doctors explained that methadone was different from other drugs because it is a medication and does not give patients a euphoric feeling.

“They agreed to allow us to pilot the program,” Dr. Rusdi said in an interview.

The program, which began in 2010, now has 50 patients whose ages range from 18 to 60. When they first join the program, patients must take the methadone under the watchful eye of pharmacists. After a couple of months and at least two consecutive urine tests that show they are negative for drugs, patients are allowed to take up to three doses home with them.

While the Malaysian methadone program marks the first one based in a mosque, the Islamic authorities have become involved in the fight against drugs in other countries, like China and Indonesia, where some Islamic organizations run rehabilitation centers.

Malaysia’s national Department of Islamic Development said it agreed to allow the methadone program at Ar-Rahman mosque after the National Fatwa Council granted permission for the use of methadone on the condition that it is taken under a doctor’s supervision.