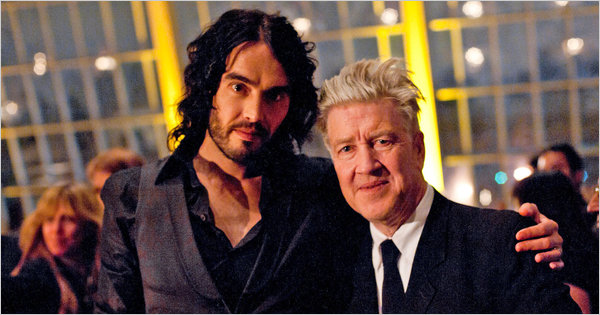 RUSSELL BRAND, the lanky British comedian, has made a career of his outrageous antics. While a host at MTV UK, he went to work dressed up as Osama bin Laden. At the network’s annual music awards, he likened Britney Spears to a “female Christ.” And he was fired from the BBC after leaving raunchy messages on the voice mail of a 78-year-old actor, a comic bit that even his country’s then-prime minister felt compelled to denounce.

It is jarring then, to say the least, to hear Mr. Brand, 35, speaking passionately and sincerely about the emotional solace he has found in Transcendental Meditation, or TM. Yet there he was in December, onstage at the Metropolitan Museum of Art (as his new wife, the pop singer Katy Perry, waited backstage), describing how TM has helped him repair his psychic wounds.

“Transcendental Meditation has been incredibly valuable to me both in my recovery as a drug addict and in my personal life, my marriage, my professional life,” Mr. Brand said of the technique that prescribes two 15- to 20-minute sessions a day of silently repeating a one-to-three syllable mantra, so that practitioners can access a state of what is known as transcendental consciousness. “I literally had an idea drop into my brain the other day while I was meditating which I think is worth millions of dollars.”

Mr. Brand was the M.C. at a benefit for the David Lynch Foundation, an organization that offers TM at no cost to troubled students, veterans, homeless people, prisoners and others. Like many other guests in the room, Mr. Brand has been personally counseled by Mr. Lynch, the enigmatic film director, who has been a devout practitioner of TM, founded in 1958 by the spiritual leader Maharishi Mahesh Yogi, since its first wave of popularity in the late ’60s. That is when Mia Farrow, after her divorce from Frank Sinatra, joined the Beatles in the Maharishi’s ashram in Rishikesh, India; when George Lucas started meditating and was rumored to have based the Yoda character in “Star Wars” on the Maharishi (the resemblance is eerie); and when the talk show host Merv Griffin, after being introduced to the technique by his tennis buddy, the actor Clint Eastwood, invited the Maharishi to be on his show in 1975.

Since then, the celebrity endorsement, and therefore the enrollment numbers, had quieted down. That is, until the last three years when, according to the national Transcendental Meditation program, enrollment tripled.

At Trinity College in Hartford, the women’s squash league began meditating together after every practice last year. The Doe Fund, an organization that assists the homeless, has begun offering TM to its residents along with computer skills and job training. And Ray Dalio, the billionaire hedge-fund manager of Bridgewater, has long credited the success of his funds to his daily practice.

The Transcendental Meditation program attributes the spike to a series of recent studies that suggest TM can help reduce blood pressure and stress, and to the relatively recent affordability of TM. (The adult course, which had ballooned from $75 in the ’60s to $2,500 in 2007, dropped, because of the economy, to $1,500 in 2008.) No less important has been Mr. Lynch’s foundation, started in 2005, for which enlisted celebrities like Mr. Brand, interrogated often by news outlets about their diets and alternative lifestyle remedies, have been preaching about the technique.

“It’s like, imagine the ripples on top of an ocean,” Dr. Mehmet Oz, who meditates in an armchair in an enclave off his bedroom, said at Mr. Lynch’s benefit. “And I’m in a rowboat, reactively dealing with the waves and water coming into my boat. What I need to do is dive into the deeper solace, the calmness beneath the surface.”

The actress Susan Sarandon meditates once a day for 20 minutes in bed. “It helps me chill out and focus,” she said. (Ms. Sarandon said she doesn’t practice TM specifically, but was at the benefit to gather insight.)

The singer Moby, another guest, has meditated in the back of a taxicab. “Transcendental Meditation has given me a perspective on agitation,” he said. “That it’s a temporary state of mind and I don’t necessarily need to take it that seriously.” Moby said the technique helped him quit drinking more than a year ago. “I used to think that TM was for weird old hippies,” he added. “But then I heard that David Lynch was involved, and that made me curious.”

ON the afternoon before the benefit, Mr. Lynch, 65, arrived at the museum, holding hands with his wife, Emily Lynch, 32, and was escorted by a museum employee to a green room downstairs. Mr. Lynch, like a cartoon character, has maintained the same uniform for decades: a pressed white shirt under a boxy black suit and a hedge of gray hair. He scooped up a soggy egg-salad sandwich from a tray and explained what brought him to the practice.

“I was not into meditation one bit,” Mr. Lynch said, in his laconic Missoula, Mont., drawl that years of living in Los Angeles has failed to dilute. “I thought it was a fad. I thought you had to eat nuts and raisins, and I didn’t want any part of it.”

Mr. Lynch was persuaded by his sister, Martha, when he began having marital difficulties with the first of his four wives, Peggy, in the early ’70s. “I had a whole bunch of personal anger that I would take out on her,” he said. “I think I was a weak person. I wasn’t self-assured. I was not a happy camper inside. Two weeks after I started, my wife comes to me and says, ‘This anger, where did it go?’ I felt a freedom and happiness growing inside. It was like — poooft! — I felt a kind of smile from Mother Nature. The world looked better and better. It’s an ocean of unbounded love within us, so it’s real hard to get a conflict going.” (Still, a year later, the couple divorced.)

It’s easy to shrug off such utterances as hokey, New Age prattle — who can forget Jeff Goldblum’s flaky character in “Annie Hall” on the phone, complaining that he’d forgotten his mantra? — but less so when the person reciting it has dreamed up his most widely admired, vivid films on the days when he was dropping out of consciousness for at least 30 minutes a day.

“Artists like to say, ‘I like a little bit of suffering and anger,’ ” he said. “But if you had a splitting headache, diarrhea and vomiting, how much would you enjoy the work and how much work would you get done? Maybe suffering is a romantic idea to get girls, but it’s an enemy to creativity.”

As he continued to explain the practice, Mr. Lynch was becoming excited. And he was making sound effects again. “It’s like a key that opens the door to the treasury within,” he said. “Here’s an experience — poooft! — total brain coherence. It’s what’s missing from life today: unbounded intelligence, creativity, bliss, love, energy, peace. Things like tension, anxieties, traumatic stress, sorrow, depression, hate, rage, need for revenge, fear — poooft! — all this starts to lift away. You see life getting better and better and better. Give the people that experience and — poooft. Man, it’s beautiful.”

Sharing that experience is the purpose of Mr. Lynch’s foundation. Money raised at the December benefit — along with private contributions — pay TM program fees to teach the technique in schools and prisons and to other groups that apply for a grant. (Some public school parents have resisted on the premise that TM is believed by some to be rooted in Hinduism; the organization maintains that it’s not a religion and that there is no inherent belief system.)

In the last decade, independent studies have found that the technique may reducehypertension, obesity and diabetes in patients with coronary heart disease (Cedars-Sinai Medical Center in Los Angeles) and can be beneficial to brain function and cognitive development (American University). But Sara Weber, the chairwoman of the Contemplative Studies Project of New York University’s postdoctoral program in psychotherapy and psychoanalysis, expressed some skepticism.

“Believe me, it’s a great relaxation and everyone needs to relax, and probably relaxing makes everyone feel better and promotes some of those things,” Dr. Weber said. “And some people can deal with what arises just by calming down. But other people who have been through trauma disassociate and go into a deadened space where they don’t feel. So what happens if that breaks down in the middle of one of those bliss sessions?”

In her experience, Dr. Weber said, the technique could even have adverse side effects. “Some people report falling apart,” she said. “They can have very intense and bad emotional experiences.”

Back at Mr. Lynch’s benefit, Robert Roth, the vice president of Mr. Lynch’s foundation — known to TM’s celebrity clients as, simply, Bobby — was sharing a table with Mr. Brand and Ms. Perry. Mr. Roth insisted that the celebrity muscle of the evening was for fund-raising purposes and wouldn’t have much sway over bringing in clients. “No one is going to meditate twice a day because a Hollywood filmmaker is doing it,” Mr. Roth said.

Though it helps with publicity, the Hollywood community’s embrace of the technique could in theory cheapen TM’s message, in light of that particular group’s capricious spiritual tastes — Madonna and the kabbalah or Tom Cruise and Scientology.

Indeed, at least one guest at the benefit had already moved on from TM.

“I tried it 10 years ago,” said Rose McGowan, the actress. “It was fantastic, but now I do fight training. For me, personally, it’s the only thing that gets me out of my mind. I think even David Lynch would approve.”