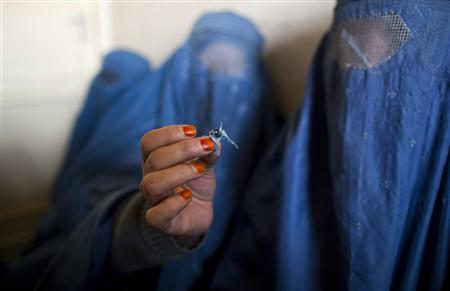 Anita lifted the sky-blue burqa from her face, revealing glazed eyes and cracked lips from years of smoking opium, and touched her saggy belly, still round from giving birth to her seventh child a month ago.

“I can’t give breast milk to my baby,” said the 32-year-old Anita, who like other women interviewed for this story, declined to give her full name. “I’m scared he’ll get addicted

She was huddled with other women at the U.N.-funded Nejat drug rehabilitation center in the old quarter of Kabul, having sneaked out of her home to avoid being stopped by her husband from going outside alone.

With little funding and no access to substitution drugs such as methadone, treatment is rudimentary at Nejat for a problem that is growing in a dirt-poor country riven by conflicts for more than three decades.

Afghanistan is the source for more than 90 percent of the world’s opium, which is used to make heroin, and more of it is being grown than ever before.

While it is not uncommon to see men shooting up along the banks of the dried up Kabul riverbed in broad daylight, women in the ultra-conservative culture of Muslim Afghanistan are expected to stay out of public view for the most part. They often have to seek permission from a male relative or husband to leave their home, and when they do they are encased in the head-to-toe burqa.

“I am not allowed to leave home for medical checks. What can I do? I am a woman,” Anita said matter of factly.

Like many of Afghanistan’s female drug users, Anita picked up the habit from her husband.

Like other women interviewed for this story, Anita asked that only her first name be used. Shrouded in stigma, female drug users is a topic that is almost never mentioned in Afghanistan.

They agreed to tell their stories to a reporter only through an intermediary they trusted.

Opium poppy cultivation in a country that has been growing the plant for a thousand years increased 7 percent in 2011 from the year before, due to a spike in prices and worsening security, according to a survey sponsored by the United Nations Office on Drugs and Crime.

In 2011, the farm-gate value of opium production more than doubled from 2010 to $1.4 billion and now accounts for 15 percent of the Afghan economy, the UNODC says.

Opiate consumption in Afghanistan, where it has long been a medication but in recent years has been used increasingly for recreation, is also on a sharp rise. The UNODC says Afghanistan has around one million heroin and opium addicts out of a population of 30 million, making it the world’s top user per capita.

No estimates are available on how many women are addicted to opium or heroin. Nejat estimates around 60,000 women in Afghanistan regularly take illegal drugs, including hashish and marijuana.

“There has been a definite increase amongst women drug users over the last decade,” said Arman Raoufi, director of harm reduction for women at Nejat.

Smoking opium costs around 200 Afghanis a day ($4), a very expensive habit in a country where a third live beneath the poverty line. Women send their children to collect scrap and bottles to help pay for their habit, or resort to begging, extending a hand to cars from beneath their burqa on busy streets when their husbands have left home.

“My husband took on a second wife and began to ignore me, so I started to smoke his powder (opium) and now must beg,” said Fauzia, 30, a petite mother of five sitting in the corner of Nejat, her embroidered floral slippers poking out from under her baggy trousers. She said she was terrified that her husband and male relatives might discover she was seeking treatment on her own at the center.

Treatment options are sorely limited. A pilot project launched two years ago by Medecins du Monde, which gives methadone to drug addicts, is the only one in the country.

The National AIDS Control Programme (NACP) wants to roll it out across the country, but the Ministry of Counter-narcotics has objected, saying it would introduce yet another narcotic onto the black market.

With her five-year-old son tugging on her unwashed burqa, 30-year-old Najia said she has smoked opium for nine years.

“It is so hard for me. I have kids. I’m poor. I’m not able to work — my husband won’t allow me,” said the raven-haired mother of four.

Najia said she picked up the habit from her husband after he returned from his job as a laborer in neighboring Iran.

Raoufi at the Nejat center says the return of migrant workers and refugees, who fled to Iran and Pakistan during the Soviet occupation of the 1980s, and the bloody civil war and Taliban rule that followed, is the main reason behind the rise in female drug addicts.

Increased street prostitution since the fall of the Taliban, which policed the trade more rigorously than the government does today, has also contributed, he said.

Iran has the second highest heroin abuse rate in the world after Afghanistan, according to UNODC. Afghan addicts among the 1 million refugees in Iran have become such an issue Tehran has started to expel them.

“Our relatively open borders are not doing us any favors,” said Feda Mohammad Paikan, who heads the NACP working under the Afghan Ministry of Public Health. “Most addicts get hooked in Iran, and many of these men have wives.”

Of its 164 inmates, 64 are opium and heroin users, double what it was when the clinic started in 2008, said clinic doctor, Hanifa Amiri.

“There are simply more drugs out there available to women now,” she said, waving a medical-gloved hand over a prison courtyard, where burqa-clad female relatives were bringing gifts of pomegranates and flat naan bread for the inmates.

With cropped black hair, a leather jacket and a henna tattoo of a scorpion on her hand, inmate Madina looks nothing like an ordinary Afghan woman.

One of seven injecting heroin users in Badam Bagh, she lives with her teenage son and daughter in prison, where she has been for seven years since she killed her husband.

She said she murdered him after he forbade her from prostituting herself to support her habit, said Madina, the only inmate at the prison who agreed to speak to Reuters.

“I would love to give it all up, but how am I meant to, as a woman?” the 37-year-old mother of two said as she scratched at the scabs on her arm, dark red from recent use.

She supports her habit by selling handmade sexual aid tools — stuffing compacted wool into condoms — to other inmates, several of whom have developed lesbian relationships.

HIV and AIDS is becoming a more serious issue, largely spurred by injecting drug use, and could reach the general population if not tackled properly.

A new strategy being rolled out by the health ministry to target more women in counseling and HIV testing is being met by opposition from the strong conservative forces in Afghan society.

“HIV and drug use are viewed as evil in Muslim society, and even more so for women,” said specialist Mohammad Hahn Heddait, who works at the infectious diseases hospital under the ministry of health.