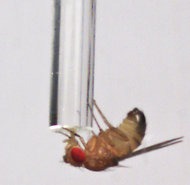 They were young males on the make, and they struck out not once, not twice, but a dozen times with a group of attractive females hovering nearby. So they did what so many men do after being repeatedly rejected: they got drunk, using alcohol as a balm for unfulfilled desire.

And not one flew off in search of a rotting banana.

Fruit flies apparently self-medicate just like many humans do, drowning their sorrows or frustrations for some of the same reasons, scientists reported Thursday. Male flies subjected to what amounted to a long tease — in a glass tube, not a dance club — preferred food spiked with alcohol far more than male flies that were able to mate.

The study, posted online in the journal Science, suggests that some elements of the brain’s reward system have changed very little during evolution, and these include some of the mechanisms that support addiction. Levels of a brain chemical that is active in regulating appetite predicted the flies’ thirst for alcohol. A similar chemical is linked to drinking in humans.

Dr. Heilig, who was not involved in the research, said the findings also supported new approaches to treating alcohol dependence. Researchers are investigating several compounds aimed at blunting alcohol urges.

Scientists have long known that other species have their methods of stress reduction. In lab studies, mice, rats and monkeys drink more after periods of isolation, studies suggest; the same is true of mice that are bullied or are victims of aggression.

To test the relationship between stress and alcohol in fruit flies, researchers at the University of California, San Francisco, allowed one group of male flies to mate freely with available virgin females. Another group of male flies had the opposite experience: the females they mingled with had already mated, and were thus indifferent to any approach.

After four days, the flies in both groups fed in glass tubes outfitted with four straws, two providing a regular diet of yeast and sugar and two containing yeast, sugar and 15 percent alcohol.

Fruit flies as a rule will, like many humans, develop a taste for alcohol and, in time, a preference for the 15 percent solution. But the rejected flies drank a lot more on average, supping from the spiked mixture about 70 percent of the time, compared with about 50 percent for their sexually sated peers.

The researchers conducted several additional experiments to rule out other explanations. The flies were apparently using the alcohol as a way to compensate for their frustrated desire.

“It’s the first time we have shown this link between a social experience that involves reward and a drug-related behavior” in these flies, said Ulrike Heberlein, a neuroscientist at the University of California, San Francisco, and a co-author of the paper.

The other authors, all neuroscientists, were Galit Shohat-Ophir, Karla R. Kaun and Reza Azanchi; all four authors now also do research for the Howard Hughes Institute’s Janelia Farm Research Campus, in Ashburn, Va.

The researchers found that levels of a chemical active in the brain called neuropeptide F, or NPF, correlated strongly with the flies’ appetite for alcohol: when levels of NPF were low, alcohol consumption was high, and vice versa.

The NPF molecule in flies is thought to be analogous to the action of chemical called neuropeptide Y in humans, or NPY.

Previous studies have found that NPY is involved in a wide range of behaviors, like eating, sleeping and response to stress. But the new study, and others, suggest that scientists could reduce drinking by developing drugs that enhance the activity of NPY, said George Koob, a professor of neurobiology and addiction at the Scripps Research Institute in La Jolla, Calif.

“The study implies that it is this system that goes haywire in addiction,” Dr. Koob said, “and that it’s very sensitive to stress. For instance, after you lose a loved one, or a relationship has crashed, you get dysphoric, your NPY goes down, and this provides a strong urge to drink a lot — whether you’re a mammal or a fruit fly.”