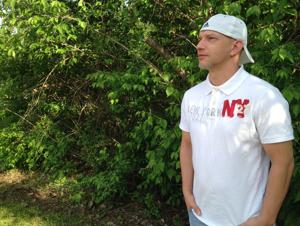 MANSFIELD, Ohio — When Ken McGregor II of Mansfield was struggling with his addiction, he didn’t have many people to turn to for comfort and guidance except for his “using buddies,” who encouraged him to stay on drugs.

Ashamed by his actions, he alienated himself from loved ones. “I didn’t want to see my friends or anybody around me in my life because I didn’t want them to be hurt by who I became: I was a monster,” he said.

“Just to be numb”

The Madison High School graduate of 1994 was introduced to pain pills in 1999 when he had knee surgery.

“Being naive to drug addiction, when I had that knee surgery, I’d find myself during the day taking one or two pills and then I’d save the rest of my doses for night and take them all at once because I found that the euphoria was better,” he said.

It wasn’t until 2007, however, that he became heavily addicted. Early that year, he had knee surgery and was again prescribed pain pills. When his bottle ran dry, he started buying pills off the street.

“I was using pills more to deal with little frustrations. Ultimately, I was letting the drugs make my decisions for me and not letting me see what I had in front of me,” he said.

His addiction caused him to lose his house, car and even his relationship with “a wonderful woman,” he said. “Then I started hitting them harder,” he said of the pills, “just to be numb.”

He entered a relationship with another woman and introduced her to pain pills. “She started hitting them just as hard as me,” he said.

Together, they moved to Mt. Vernon, where they started using heroin.

“It got to the point where I was waking up in the mornings trying to figure out how I was going to get $20 to go get high, he said.

“I wasn’t working; I was putting my drug-use before my children and unfortunately that’s the nature of the beast.”

Because he failed to pay child support, he was sentenced 60 days in Ashland County Jail. He was released 20 days early with “every intention of getting of the stuff,” he said. “I made it two weeks and then ran into somebody I used with and got back on it.”

A few months later, he again failed to pay child support and was required to complete his original sentence.

He began using Suboxone that he got off the street after he was released the second time and started going to church “because I was trying to get back in my faith to try to help me quit,” he said.

In August of 2013, he moved back to his parents’ home and was sober for the first six months of his stay.

“That whole time, all I was doing was working and going back to my parents,” he said. The monotony of his daily routine got the best of him.

“I was lonely and unhappy with my life,” he said. “And two of my biggest triggers are loneliness and boredom.”

So when one of his co-workers offered him heroin, it was hard to resist.

“Three hundred dollars would go into my arm or my ankle or whatever,” he said.

He later lost his job and money got tight.

In May, he was sent to jail for disorderly conduct. Once released, he was placed on probation.

“They asked me if I had a drug problem and I just denied it,” he said, noting that his shame hindered him from admitting that he had a problem.

Before long, he grew weary of the lies and told his probation officer that he had a problem and needed help.

In July, he joined an intensive outpatient program at Catalyst Life Services in Mansfield and later enteredNew Beginnings Alcohol & Drug Treatment Services, where he spent the next six and a half months for treatment.

During the first six weeks, he thought he’d go right back to drugs after he completed the program.

That mindset began to fade as he progressed through the program.

“I realized that I could do this,” he said.

He began going to recovery meetings like Alcoholics Anonymous and Reformers Unanimous, “which really helped me because that’s a faith-based program,” he said.

In December, he faced a “setback” after testing positive for cocaine during one of the drug tests.

“I was mad. That was when I about ready to give up and walk out because I was telling the truth,” he said.

Because he tested positive, he spent three days in jail and then re-entered New Beginnings, “even though I didn’t want to at first,” he said.

He made some changes when he returned. He refused to go anywhere outside the facility, unless it was for meetings “because I didn’t want to risk being some place I couldn’t control and accidentally come in contact with something because that’s the only way that I think I got a false positive,” he said.

Before he was discharged from New Beginnings on Jan. 30 of this year, he worked with Vocational Rehabilitation Public & Private Partnerships (VRP3) to create a resume. One day after posting his resume on CareerBuilder, he got a call from his current employer at Hedstrom in Ashland, asking him to come in for an interview. Read more…