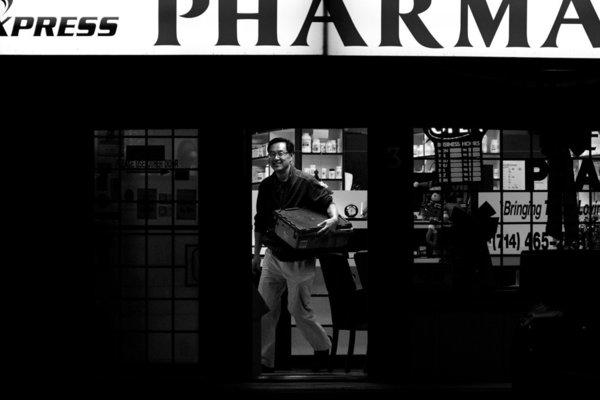 All four died of drug overdoses after filling prescriptions at the tiny pharmacy in Huntington Beach, court and coroners’ records show.

Pacifica’s owner, Thang Q. “Frank” Tran, sold pain medications in large quantities. Particularly popular with his customers were high-dose, 80-milligram tablets of OxyContin. Tran filled nearly twice as many of those prescriptions as did nearby Walgreens, CVS and Sav-On pharmacies combined, according to state records.

Many of his customers traveled long distances and paid cash. Rovero drove more than 350 miles from Arizona State University in Tempe to get his prescriptions in Rowland Heights and then 33 more miles to the pharmacy.

“I thought to myself, ‘Why in the world would these kids go that much farther out of their way?’ ” said April Rovero, whose son was 21 when he died. “Someone must have told them to go there.”

Pharmacists are supposed to be a last line of defense against misuse of prescription medications. By law, they are required to scrutinize prescriptions, size up customers and refuse to dispense a drug when they suspect the patient has no medical need for it.

Some, however, provide massive amounts of painkillers and anti-anxiety drugs to addicts and dealers with no questions asked, according to state records, regulators and law enforcement officials.

Rogue pharmacists are key enablers of drug abuse and an important source of supply for the illegal market.

State officials who license and oversee pharmacies are overmatched by the scale of the problem.

Those for OxyContin, Dilaudid and other potent painkillers have increased 52% over the last five years, according to a review of prescription data collected by the state. The total dosage dispensed by pharmacies has also grown: by nearly 50%, the data show.

The task of identifying careless or corrupt pharmacists and initiating disciplinary action falls to 37 investigators for the California Board of Pharmacy.

“We are struggling to keep up because there are more pharmacies, more licensees, more places to go,” said Virginia Herold, the agency’s executive director. “We work really hard. But there’s a limit to what we can do.” Read More…