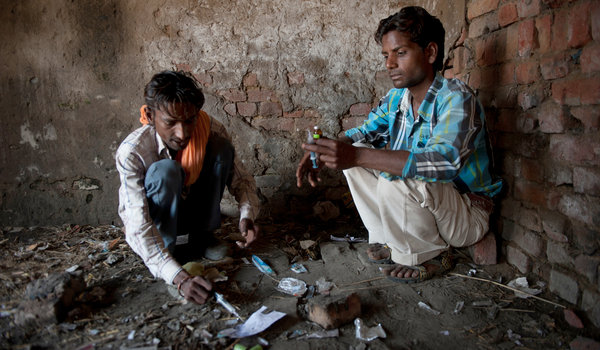 KAZIKOT VILLAGE, India — In this village not far from the Pakistani border, the wheat harvest is only days away. Water buffaloes are resting in the shade. Farmers are preparing their fields. And drug addicts like Pargat Singh are crouched in the shadows, injecting themselves with cocktails of synthetic drugs.

Last Thursday, just after 11 a.m., Mr. Singh followed another man into a dark corner of a decrepit building favored by the roughly 50 addicts in this village. Cracked prescription bottles littered the ground. The other man jabbed a syringe into his arm and injected a blend of prescription drugs that delivers a six-hour high.

“Save some for me,” said Mr. Singh, who is H.I.V. positive and stricken with tuberculosis. He told a photographer: “Shoot my picture. Make me famous.”

Throughout the border state of Punjab, whether in villages or cities, drugs have become a scourge. Opium is prevalent, refined as heroin or other illegal substances. Schoolboys sometimes eat small black balls of opium paste, with tea, before classes. Synthetic drugs are popular among those too poor to afford heroin.

The scale of the problem, if impossible to quantify precisely, is undeniably immense and worrisome. India has one of the world’s youngest populations, a factor that is expected to power future economic growth, yet Punjab is already a reminder of the demographic risks of a glut of young people. An overwhelming majority of addicts are between the ages of 15 and 35, according to one study, with many of them unemployed and frustrated by unmet expectations.

For the Punjab government, the problem is hardly unknown. Private drug treatment centers, some run by quacks, have proliferated across the state, and treatment wards in government hospitals have seen a surge in patients. Three years ago, a state health official warned in a court affidavit that Punjab risked losing a whole generation to drugs. Roughly 60 percent of all illicit drugs confiscated in India are seized in Punjab.

Yet when Punjab held state elections this year, the candidates rarely spoke about drug abuse. In fact, India’s Election Commission said that some political workers were actually giving away drugs to try to buy votes. More than 110 pounds of heroin and hundreds of thousands of bottles of bootleg liquor were seized in raids. During the elections, party workers in some districts distributed coupons that voters could redeem at pharmacies, activists said.

“We have encountered the problem of liquor during elections in almost all states,” S. Y. Quaraishi, India’s chief election commissioner, told reporters. “But drug abuse is unique only to Punjab. This is really of concern.”

Punjab’s reluctance to treat the drug situation as a full-blown crisis is partly because the state government itself is dependent on revenue from alcohol sales. Roughly 8,000 government liquor stores operate in Punjab, charging a tax on every bottle — an excise that represents one of the government’s largest sources of revenue. India’s comptroller found that liquor consumption per person in Punjab rose 59 percent between 2005 and 2010.

“We are promoting addiction in our state,” said Dr. Manjit Singh Randhawa, the city of Amritsar’s civil surgeon, a job akin to chief medical officer. “I’m getting calls from people saying they have lost their children, they have lost their breadwinners. In every village, people are falling prey to this drug abuse.”

Ranvinder Singh Sandhu, a sociologist in Amritsar, surveyed 600 drug addicts in rural and urban areas of Punjab and found that they were usually young, poor and unemployed. He said that most villages did not have health clinics but did have three or four drugstores, which often made sizable profits selling pills and other synthetic drugs to addicts who cannot afford heroin.

Mr. Sandhu said he had completed his study six years ago, at the request of Punjab’s governor, yet had never been contacted by any state official about the findings. “The state is not conceiving it as a social problem,” he said. “They are conceiving it as a personal problem.”

Opium has a long history in Punjab, and was commonly and legally consumed here before India and Pakistan gained independence in 1947. Today, Punjab is a primary gateway for opiates smuggled into India from Pakistan and Afghanistan. Opium is also grown legally in India for medicinal purposes, and some of the crop arrives in Punjab on the black market.

The problem is prevalent in middle-class enclaves, where some users are hooked on heroin. One impoverished neighborhood of Amritsar, called Maqboolpura, is known as the Village of Widows — because so many young men have died of drug abuse.

“Drugs are available everywhere,” said Ajit Singh, who has spent 13 years running a school for poor children affected by drug abuse. Of the school’s 656 students, roughly 70 percent have lost a parent to drugs. One girl, a fifth grader, lost five uncles and her father to drug-related deaths.

In Kazikot Village, about a two-hour drive from Amritsar, a local nongovernmental organization tries to prevent the spread of H.I.V. by regularly distributing clean syringes to addicts. The group’s workers say there are 48 hard-core addicts in the village (out of more than 2,000 people) but that many other people use drugs. Government officials have sponsored “camps” here, with health officials providing antidrug information or trying to persuade addicts to undergo treatment — neither of which, villagers say, has been successful.

“Everybody knows about it,” said Hira Singh, a local shopkeeper. “But nobody does anything to stop it.”

Mr. Singh, the H.I.V.-positive addict, lives at his parents’ home with his younger brother and his sister. He started using drugs at age 15, and then quit school. He worked for several years pulling a rickshaw, got married and had a daughter. Later, his wife gave premature birth to twin sons, who died. Unable to abide her husband’s drug use, his wife left him and their daughter, Harpreet, 3.

“He steals things from the house,” said Seema Kaur, his sister. “Sometimes, he steals money.”

Mr. Singh, now 29, said he had tried many times to quit using drugs, but the urge was too strong. Because of his tuberculosis, he said, he is careful not to get to close to his daughter. “I play with her from a distance,” he said. “I try not to hug her, so that she doesn’t get infected.”

He added: “My future is finished. I am basically dead now.”