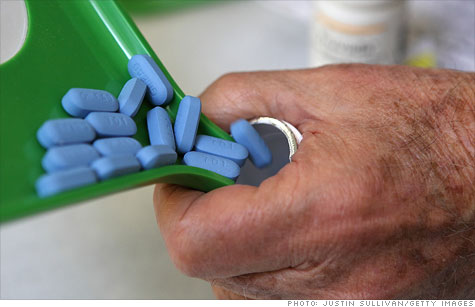 NEW YORK (CNNMoney) — One study puts the potential overall cost of painkiller abuse at more than $70 billion a year. Pill addicts who shop around for doctors to score prescriptions cost insurers $10,000 to $15,000 apiece. The toll in lost productivity: $42 billion. The criminal justice bill: $8.2 billion. It all adds up.

Over the past decade, prescription drug abuse in the U.S. has increased rapidly, to the point that the Centers for Disease Control and Prevention now labels the problem an “epidemic.”

More than 36,000 people died of drug overdoses in 2008, the most recent year for which data has been analyzed, according to the CDC, only a few thousand shy of the total killed by car crashes. Of those drug overdoses, prescription drugs were involved in over 20,000 cases.

Of particular concern are prescription painkillers like methadone, oxycodone, and hydrocodone, which the Coalition Against Insurance Fraud describes as “by far” the most-abused prescription drugs. Oxycodone and hydrocodone are commonly marketed under the brand names OxyContin and Vicodin, respectively.

Sales of prescription painkillers since 1999 have more than tripled, and their involvement in overdose deaths has spiked as well, from 4,000 cases in 1999 to 15,000 in 2008. That’s more than heroin and cocaine combined.

“There’s no doubt that this is a growing cost to society,” said Kevin Sabet, a former senior advisor at the White House Office of National Drug Control Policy. “We’re in the midst of an epidemic, and it’s really time for America to wake up.”

How drug abuse costs add up

As the human costs mount, so too do the economic ones. The Coalition Against Insurance Fraud, an alliance of consumer groups, insurance companies and government agencies, put the cost of prescription painkiller abuse for insurers at up to $72.5 billion in a 2007 study, and other reports show the abuse of such drugs has risen in the years since.

Most of this expense comes from treatment, in the form of emergency room visits, rehabilitation, and associated health problems.

Medicare and private insurers are also hit for the costs of the drugs themselves, which abusers accumulate by obtaining multiple prescriptions or by visiting unscrupulous distributors known as “pill mills.”

The average “doctor shopper” — someone who gets prescriptions for the same drugs from multiple doctors — costs insurers $10,000 to $15,000 a year, according to the Coalition Against Insurance Fraud. Dealers also stockpile the drugs using bogus prescriptions and insurance claims.

“These costs get passed on to average Americans in the form of higher premiums,” said Jim Quiggle, communications director for the coalition. “When it comes to Medicare, these are essentially taxpayer dollars that are being stolen.”

Beyond the health care system, further tolls come from lost productivity and criminal justice costs. A study published last year in the Clinical Journal of Pain pegged these expenses at $42 billion and $8.2 billion, respectively, for the year 2006.

Searching for solutions: At the same time, millions of Americans suffer from chronic pain for which they depend on prescription painkillers, so experts say any efforts to tackle the problem must not restrict access for patients in need.

“These are life-saving medications for a lot of people and they make a lot of people’s lives better, so we have to maintain that balance,” Sabet said.

States have addressed the issue through Prescription Drug Monitoring Programs, or PDMPs — databases that track the distribution of prescription drugs to individuals, allowing authorized professionals like doctors and law enforcement to identify potential abuse. Thirty-seven states had established PDMPs as of October, according to the Drug Enforcement Administration, and 11 more had authorized such programs but had yet to implement them.

For these programs to reach maximum effectiveness, however, they need to offer doctors and pharmacists real-time data and be linked to a national database to prevent doctor-shopping across state lines. Experts are also calling for less addictive forms of prescription drugs and a more robust public education effort, similar to what’s been done for tobacco.

“I don’t think we’re going to arrest our way out of this problem,” Sabet said. “It’s got to be a comprehensive approach.”