Researchers reported that a low, early subjective response to alcohol — or an ability to hold one’s liquor — may protect a drinker against alcohol 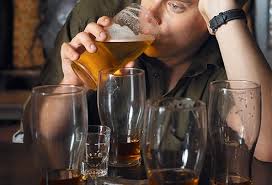 problems initially, but will likely become a risk for longer-term alcohol-related problems as their tolerance develops.

“People who have a low innate response to alcohol may be protected against acute negative consequences early in their drinking careers, and as a consequence, they may believe that they are at low risk for long-term problems because they can ‘hold their liquor,’” study researcher William R. Corbin, PhD, of , told Psychiatric Annals. “Unfortunately, an extensive body of research has shown that they are actually at increased risk for long-term problems with alcohol.”

Corbin and colleagues studied the effects of subjective response to alcohol and acquired tolerance in 113 heavy drinking young adults who had not yet reached the peak period of risk for developing alcohol use disorders. The participants were recruited from a  of naltrexone (Vivitrol, Alkermes) in combination with motivational counseling. A series of valid measures were used to assess early subjective response, the frequency and quantity of alcohol use, and alcohol-related consequences in the past year.

However, controlling for weekly drinking, the researchers found that a lower initial response to alcohol, evidenced by needing more drinks to feel the effects of alcohol, actually decreased the risk for alcohol-related problems (P=.03). The association persisted even after controlling for tolerance (P=.01).

According to the researchers, this protective effect may translate to a greater risk for alcohol-related problems by allowing those with a low initial response to continue hazardous drinking behaviors.

“It is important for the public to understand the increased risk associated with a low level of response to alcohol so that these individuals can take steps to reduce their risk before serious problems develop,” Corbin said. Article Link…