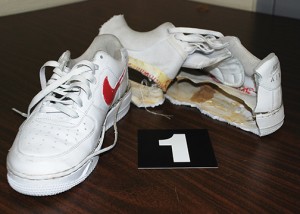 After being addicted to heroin for more than four years, which included multiple attempts to get clean, Ryan Tarvin, of Price Hill, formerly of Williamsburg, put the needle down in February of 2014 and vowed to do whatever it took to change.

“I don’t know what it was, if I had a spiritual awakening,” Tarvin said about his decision. “I was sick and tired of being sick and tired. At that point if it meant I had to die, I was taking that chance.”

Tarvin recalls the next morning after he made the decision, the day after the Superbowl in 2014.

“I woke up Monday morning running to the restroom puking,” Tarvin said. “That continued for a couple hours. My mom came and got me. I puked probably over 100 times. The next thing I knew I woke up in the ER. I started hallucinating. I stayed one week in the hospital.”

When he was discharged, Tarvin entered a recovery program and after that a sober living facility and began his journey toward getting, and staying clean.

“What made it possible was I was around 15 guys trying to accomplish the same thing,” Tarvin said about sober living.

“Sober living you’re in the real world, you have to deal with real-world problems,” Tarvin said. “It provides structure.”

In sober living there are daily chores that have to be completed and residents have to to attend meetings and work through a 12-step program, Tarvin said. Residents have to get a job and pay bills, he said.

“It teaches you to be responsible,” Tarvin said.

Tarvin said he also relied on his faith.

“In active addiction I lost touch with my higher power,” Tarvin said. “I questioned everything about it. I remember I used to pray take care of my family, friends. I changed my prayer. I just gave it time.”

And it wasn’t easy.

“Everything has to change about you,” Tarvin said about getting clean. “Every day was a fight.”

In Clermont County there are local resources for addicts who want to get clean.

Karen Scherra, executive director of Clermont County Mental Health and Recovery Board, said the Clermont Recovery Center provides services for addicts in Clermont County and serves around 1,600 people each year.

“It’s a comprehensive outpatient services provider,” Scherra said about CRC. “It’s for adolescents and adults. They have access to other services in other counties who have funding.”

“It’s a choice,” Scherra said. “Clinically it may not be recommended for everybody.”

Scherra said there are other privately-owned and managed facilities and resources for addicts in the county including Adams Recovery Center in New Richmond and Goshen, The Ridge in Milford, Teen Challenge, and more.

Rather than staying in jail, the alternative sentencing center provides a place where the misdemeanor offenders can receive treatment for substance abuse while staying at the jail.

Originally, Talbert House was operating CASC, however Clermont County Commissioners are in the process of selecting a new organization to resume operations of the alternative sentencing center.

Scherra said CCMHRB has also worked to make Narcan, a drug used to reverse the effects of an overdose, available in Clermont County.

The Clermont County Sheriff’s Office received Narcan to carry in patrol cars in September of last year, according to Lee Ann Watson, assistant director of CCMHRB.

“They got trained in September,” Watson said. “They’ve had 10 (people) saved at the sheriff’s office.”

Watson said the kits are also available to family members of addicts.

“They are for family members, clients of CRC, people who just want one in the community,” she said.

Donna Dowdney, Tarvin’s mother, said that families of heroin addicts should know that support is available.

If a parent finds out their child is addicted they need to get educated about heroin addiction, stop giving their child money and join a support group, Dowdney said.

“Parents need to learn about enabling and setting up strict boundaries,” Dowdney said.

When it came to helping her son, Dowdney said she couldn’t shut the door on him.

“Tough love, that’s where you shut the door,” Dowdney said. “There is also ‘tougher love.’ I could do tougher love not tough love.”

Having support from family members is something many addicts don’t get, Tarvin said.

“My family was 100 percent supportive,” Tarvin said. “I didn’t struggle financially. The less stress you have the better your chances are.” Read more…