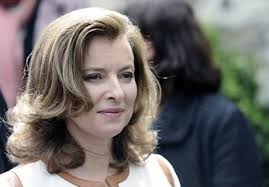 France’s first lady, Valerie Trierweiler, left the hospital Saturday after spending a week recovering from what the European press described as a drug overdose.

Her stay at La Pitie-Salpetriere hospital coincided with allegations that President Francois Hollande was having an affair with actress Julie Gayet.

Hollande, who isn’t married to either woman, has said he would sort out the love triangle before a Feb. 11 state visit to Washington — an event to which Trierweiler, his official girlfriend, would normally accompany him.

Speculation has swirled for more than a week that Gayet may replace Trierweiler as France’s top dame.

One friend told The Sunday Times of London that Trierweiler had taken “one pill too many” after a “cold and implacable” president told her he’s been carrying on the affair.

Doctors then reportedly advised Hollande to stay away from her bedside to avoid upsetting her.

But Hollande sent flowers, chocolates and text messages and was allowed to see Trierweiler on Thursday — the same day he tried to get her to sign a separation agreement, one source said. Article Link…