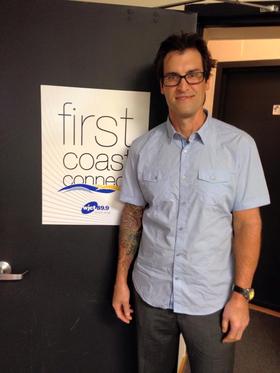 He was a college football star at the University of Nebraska.

Then Jason Peter went on to become an NFL first-round draft pick, playing defensive end for the Carolina Panthers for four seasons.

Peter was also an addict, though, and it all started with painkillers to treat injuries he suffered on the field.

“I remember the first time I was given some pills, maybe four or six of them,” he said on First Coast Connect. “And I liked the way they made me feel.”

Peter tells his story of a harrowing descent into cocaine and heroin addiction and his journey back, in the riveting New York Times bestseller “Hero of the Underground: My Journey Down to Heroin and Back.”

Said Jerry Stahl, author of Permanent Midnight, “Hero of the Underground gives us a portrait of red-blooded jock as monster dope fiend. It’s a savage, unsparing, eye-popping ride through the dark soul of big money, endless drugs, American manhood and our national past time — self-destruction. Ex-Cornhusker Jason Peter writes like a soulful badass, and we’re lucky he lived to tell the tale. Had Hunter Thompson been a football player, instead of a fan, this is the book he’d have written. Flat-out, mash-your-face-in-the-dirt amazing.”  Read more…