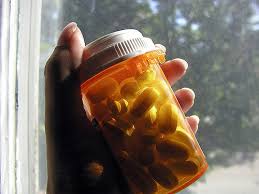 About a year ago, Jacob Daus found himself standing before a judge in drug court, again. The 25-year-old had just finished his fourth drug-related sentence in seven years at the Barnstable County Correctional Facility. Was there anything, the judge wanted to know, that might help Daus stay away from heroin and out of jail?

“He asked me if I could come up with a plan for my release cause they didn’t know exactly what to do with me, they were just holding me,” Daus said. “I offered to start the naltrexone.”

Daus had heard about the drug from another inmate. Naltrexone seals receptors in the brain. Picture lots of little cups. The drug creates a tight lid so that the cups cannot be filled with heroin, other opiates or alcohol.

Patients can take naltrexone pills, but they have to remember, and stay motivated, to do this daily. Daus opted to take the drug as a monthly shot, which is sold under the brand name Vivitrol. Naltrexone, Vivitrol, same drug, different ways to take it. Daus had three shots.

“I would say that was the happiest time of my life,” he said.

In those three months, Daus says his cravings for heroin almost disappeared.

“Once I wasn’t focused on getting high, I felt like I had a lot more energy,” he said, “I wasn’t as depressed, relationship problems went way down. I had time to focus on my child, and I mended the relationship between me and my mother, me and my father. I gained trust back that I had lost through stealing.”

Officials inside the Barnstable jail were becoming fans of Vivitrol too. For years, the jail’s medical director, Steve Descoteaux, and his team would help inmates detox, get health insurance and counseling, connect them to a recovery program, and set up a treatment appointment for the day of their release.

“Just about all of them did not show up for the appointment that we made for them, the same day they left the facility,” Descoteaux said. “Whoever picks them up in the parking lot would have something waiting for them that would deter them from treatment.”

And that time immediately after release, “that’s the dangerous time for folks,” said Barnstable County Sheriff James Cummings. “The first two weeks back on the street is when we see a lot of them overdose, because they were not used to shooting heroin.”

So Cummings took a chance when he heard about Vivitrol. He liked the fact that it is not a narcotic. Patients cannot get addicted, and unlike other heroin treatment drugs, they cannot sell Vivitrol or naltrexone on the street.

Almost two years ago, Barnstable became the first jail in Massachusetts — and one of only a few in the country — to offer inmates a shot of Vivitrol a week before their release. Inmates have to learn about the drug and agree to attend counseling, as well as group recovery meetings. Now, Cummings says, 92 percent of inmates show up for that first appointment outside of jail.

But, Cummings acknowledges, it’s early. Barnstable does not yet have any numbers on Vivitrol recovery rates, and there are no long-term studies. The drug was just approved for heroin addiction treatment in 2010.

Doctors aren’t sure how long patients should take Vivitrol. Thirteen months is the working recommendation; Daus was on Vivitrol for three months. MassHealth, the state’s Medicaid program, paid for the shots at $1,000 each.

Alkermes — the Waltham company that owns the controversial new painkiller Zohydro — also produces Vivitrol, and gives it to Barnstable and three other jails in Massachusetts for free.

After his third shot, Daus got kicked off MassHealth because he didn’t return an address confirmation letter. He couldn’t afford the shots and started using again. This time it was one of the heroin treatment drugs, Suboxone. Now Daus is back in jail.

Sitting in a windowless jail classroom, in navy blue prison shirt and pants, Daus said he wants to try Vivitrol again when he’s released next month. He said he’s committed to counseling and group meetings this time, because while Vivitrol can control heroin use, it can’t fix his depression, guilt or the scars of childhood traumas.

Addiction treatment programs across the country are watching the Barnstable County pilot project. The fact that patients get their first shot in jail, where they’ve been off heroin for some time, makes a difference.

Patients must be off heroin and other opiate-based drugs for seven to 10 days before they start Vivitrol. That’s because the drug empties receptors (remember those cups) before it seals them, which can make patients violently ill from a forced withdrawal. Narcan, which can reverse a heroin overdose, operates on the same principle as naltrexone, but does not produce a lasting seal.

It can also take several weeks to secure insurance payment for naltrexone or Vivitrol. Many addicts who are not in jail can’t resist heroin cravings for weeks while they wait for a shot.

But Ray Tamasi, who runs Gosnold, a network of addiction treatment facilities on Cape Cod, says the benefits of Vivitrol have persuaded him to use it instead of traditional treatment drugs that can themselves be addictive.

“[Vivitrol] does seem to help many [patients],” he said. “We like that. Whatever we can do to help make it possible for persons to say in remission longer, to respond to some of the counseling because they’re not preoccupied by cravings, is all helpful to people.”

Tamasi uses recovery counselors to help patients continue therapy, group meetings and Vivitrol or naltrexone. He’s tracking patients who drop off after a few months because they feel better or because they don’t like the idea of using a drug to beat a drug addiction.

Some doctors worry that patients will try to override Vivitrol by taking lots of heroin and overdose. It leaves a few receptors open. Daus tested Vivitrol with a gram of heroin — enough to kill some people. He didn’t even get high.

Dr. Barbara Herbert, who specializes in addiction medicine at Saint Elizabeth’s Medical Center, is prescribing Vivitrol, but only to patients who have no history of overdose.

“In a disease where people have been repeatedly trapped and stigmatized, any hope has value,” she said. “The primary thing we’re doing is peddling hope.”

Hope that this drug will help patients stay off heroin and other opiates long enough to let their brains heal and deal with the problems that trigger their addiction.

If Vivitrol or naltrexone can reduce heroin addiction, some public health officials are optimistic it will also curb transmission of HIV and hepatitis C. The experiment is underway as we speak. Article Link…