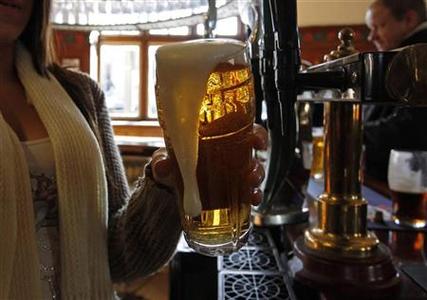 People in Europe drink more alcohol than in any other part of the world, downing the equivalent of 12.5 litres of pure alcohol a year or almost three glasses of wine a day, according to report by the World Health Organisation and the European Commission.

But while the title of world’s heaviest drinkers goes to the European Union as whole, where consumption is almost double the world average, there are also wide variations in drinking levels between sub-regions, as well as big differences in how frequently, where and when people drink.

Zsuzsanna Jakab, the WHO’s regional director for Europe, said Europe’s “dubious honour” of having double the global average alcohol consumption has “clear, recognized health consequences for drinkers, those around them and society.”

In a breakdown of drinking by sub-region, the heaviest drinkers were in central-eastern and eastern Europe – consuming 14.5 litres of pure alcohol per adult per year compared to 12.4 litres in central-western and western Europe, 11.2 litres in southern Europe and 10.4 litres in Nordic countries.

But the report found a different picture when it analysed these data weighted against indicators of so-called hazardous drinking – such as drinking outside mealtimes, drinking in public places and irregular, heavy so-called “binge” drinking.

In this context, Nordic countries clocked a hazardous drinking score of 2.8 – in a range where 1 is least detrimental and 5 is most detrimental – while central-eastern and eastern Europe scored only slightly higher at 2.9.

Central-western and western Europe and southern Europe had hazardous drinking scores of 1.5 and 1.1 respectively.

The report noted that there are more than 40 alcohol-related illnesses and disorders, including alcohol dependence and harmful alcohol use, liver disease, alcohol-induced chronic pancreatitis, alcohol poisoning, and fetal alcohol syndrome.

There are also many more problems where alcohol can be a contributing factor, such as injuries and deaths from road crashes as well as illnesses like cancer and heart disease.

Worldwide, some 2.5 million people die each year from the harmful use of alcohol, accounting for about 3.8 percent of all deaths, according to previous WHO data.

Steps to curb alcohol use also feature three times in the WHO’s top 10 “best buys” for public health policies to reduce the burden of chronic diseases, which kill 36 million people a year worldwide.

The WHO backs policies such as regulating alcohol pricing, targeting drink-driving and restricting alcohol marketing which it says have been shown to be effective in cutting drinking levels. “The alcohol-related burden on health in Europe is avoidable,” Jakab said.