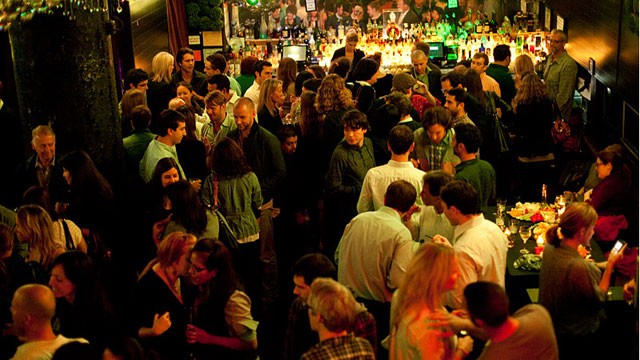 Drinking on the job? Some employers say they’re fine with that. In fact, some will even buy the booze, on the theory that a little tippling makes for a happier employee—and maybe, too, as a new study suggests, a more creative one. Those “Mad Men” of the ’60s may not have been so mad after all.

For anyone unfamiliar with the hit TV series, “Mad Men” depicts the goings-on in a Madison Avenue advertising agency of the 1960s, including the manners and mores of boozing at that time. We see office workers having an in-office pop before heading out to a multiple-martini lunch, then returning for an afternoon aperitif. This isn’t furtive drinking. It’s proud, assertive drinking, with liquor bottles and decanters in plain sight.

In New York, J. Walter Thompson has in its offices a 50-foot-long bar with pedestal stools that would put many a commercial bar to shame. “Yes, we have a bar,” says a spokesperson, “and it is frequently accessed. We think it incentivizes and enthuses employees. It’s generally used for off-hours consumption, but that’s not to say there isn’t on-hours consumption as well.”

Ad agency Kirshenbaum, Bond, Senecal + Partners hosts internal, open-bar events called Trolleys. The name comes from a drink cart, known affectionately as the trolley, that 20 years ago rolled around the agency dispensing cocktails. It since has been retired, but the liquor still flows, including brands belonging to agency clients. These currently include Svedka vodka, Glenfiddich whiskey, Milagro Tequila, Sailor Jerry rum and Hendricks gin. Non-alcoholic drinks are also are provided.

Jonah Bloom, head of digital strategy at Kirshenbaum, says the firm tries to make Trolleys “a fairly regular thing.” Employees need a chance to bond, he says–to get away from their desks for a while and have fun mingling: creatives with accountants, accountants with staff.

Plus, a drink or two has been known to aid the creative process. “Say there’s a group of employees standing around chatting,” says Bloom of the Trolleys. “They’re just having fun, having a couple of beers together. It’s a social occasion. They may not set out to solve a problem. But somebody comes up with an idea, and somebody else builds on that.” Result: Problem solved.

The agency, he says, has plenty of formal problem-solving processes. But informal ones have merit, too. He makes an analogy to sports: “Part of what makes Wayne Gretzky so good is all those pickup games he played.”

Just how much credit should go to booze, he isn’t sure. “I’m not sure it’s the alcohol,” he says of the Trolleys’ success at solving problems. “It could just be the socializing. But who knows? [Alcohol] may act as lubricant.”

A study released last week by researchers at the University of Illinois at Chicago finds that a little bit of alcohol (just enough to register 0.075 on a breathalyzer) can help your mind explore unorthodox solutions. Sometimes, researchers found, having a little less focus can be helpful. The report, “Uncorking The Muse: Alcohol Intoxication Facilitates Creative Problem Solving” was published in the journal Consciousness and Cognition.

A number of tech companies permit or encourage on-the-job drinking.

“Our philosophy,” says Joe Beninato, CEO of Palo Alto, California, app-maker Tello, “is that if we treat our employees like adults, they’ll respond accordingly.” As on Madison Avenue, workers work long hours. “They’re here morning, noon and night,” says Beninato. Tello makes available a wide variety of beverages, including alcohol. When the company scores a victory, he says, “We celebrate them with champagne or a shot of whiskey.”

When, for example, Tello got word in February that its consumer feedback app for mobile phones had been chosen for inclusion in Apple’s online store, “We had a bottle of High West’s Bourye” (a blend of bourbon and rye). “We all had a little,” he says, even though the hour was 11 a.m.

At customer review website Yelp‘s headquarters in San Francisco, not only is there beer, but the keg dispensing it is intelligent. Dubbed a kegbot, it requires each drinker to sign-in before it will dispense and keeps track of each employee’s consumption. As a Yelp VP for engineering explains on Yelp’s official blog, the kegbot is “controlled by an iPad app, [so] you can tell how much beer is being emptied, as well as leave a 5-star review of your brew.”

At crowdsourcing employment company CrowdFlower in San Francisco, marketing manager Mollie Allick confirms that, “Yes, we have a refrigerator full of beer” (and soda). There’s also a fully-stocked kitchen. “We’re all adults, and people drink at their own discretion.”

Here, too, employees work long hours, and the line between work and life can get a little blurred. If somebody’s going to be putting in a long night, she says, it may not be such a bad idea to have a beer. Does she think there’s any payoff in improved problem-solving? “That’s kind of a stretch,” she says. “But I wouldn’t say it hinders creativity.”

Whether alcohol helps or hinders problem-solving, says professor Dalton Conley, dean for the social sciences at NYU, is a matter of degree: “It’s a fine line to walk.” If consumed in moderation, alcohol, he says, shuts off the self-censoring aspect of the brain.

“That could allow for more creative inspiration.” Making it available at work might also serve to “weed out” workers who cannot keep their drinking moderate. “An alcoholic may not last long at place where people are drinking.”

He sees employers’ offering their workers alcohol as part of a larger trend: In a knowledge economy, he says, productivity “comes in fits and starts, not on an hourly basis.”

The more relaxed and homey the atmosphere at work, the longer knowledge-workers will remain, and the better the odds that inspiration will strike while they’re in harness. “It may work just as well for an employer to offer free food or free dry-cleaning” as to offer workers alcohol, thinks Conley; but the alcohol “might loosen them up a bit.”