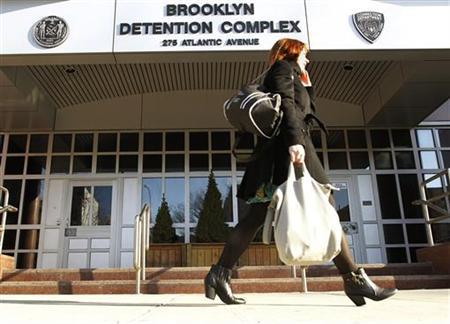 In a study of more than 155,000 people released from city jails over five years, researchers found that former inmates were twice as likely as other city residents to die of a drug overdose or homicide.

Those risks were especially high in the first two weeks after release — when they were five- to eight-times greater compared with other New Yorkers’ risks during the same two-week period.

Some former inmates also had elevated risks of suicide, including whites and people who had been homeless before going to jail.

The findings, which appear in the American Journal of Epidemiology, are not exactly surprising. They are in line with studies from other parts of the U.S., and in the UK and Australia, write the researchers, led by Sungwoo Lim of the New York City Department of Health and Mental Hygiene.

But the findings, they say, underscore a need for more programs — including mental health counseling and drug abuse treatment — to be offered in jail, and then continued in the community, after inmates are released.

MANY PRISONERS WITH MENTAL HEALTH ISSUES

It’s been estimated that more than half of Americans behind bars have symptoms of some type of psychiatric disorder, ranging from schizophrenia to major depression. And most of them also meet the definition of drug or alcohol dependence.

But only about a quarter of prison inmates, and seven percent of those in jail, receive mental health treatment while incarcerated.

Rich directs the Center for Prisoner Health and Human Rights at Brown University in Providence, Rhode Island, and was not involved in the current study.

A little over 2 million Americans are incarcerated, the majority being black and Hispanic men. But many more flow in and out” of jails each year, Rich noted.

Some are there for days, others weeks to months. When they come out, they may find that life is very different, according to Rich.

If, for example, a former inmate has no home and his family lives in public housing, he cannot stay with them.

All of that instability can be risky, especially if a person has a history of mental illness or drug problems.

A huge” issue, Rich said, is addiction to opiates, which includes not only illegal drugs like heroin, but also prescription medications like oxycodone and hydrocodone.

If opiate addicts go to jail and then stay off the drugs for weeks to months, they’ll face a risk if they go back to opiates after release.

If you start using again at the same levels as before,” Rich explained, you’re likely to overdose.”

That might help explain the increased risk of drug-related deaths in the current study. As for homicide deaths, Rich said it’s possible that some of those could also be related to drugs, but it’s not clear.

Overall, 1,149 of those people died after being released, at some point during the study period. That included 219 drug-related deaths and 219 homicides.

When compared with New Yorkers as a whole, former inmates were six times more likely to die from drugs or homicide. And their risks were two- to three-times higher versus New Yorkers in the city’s poorest neighborhoods — suggesting that neighborhood surroundings alone don’t explain the risks, the researchers say.

There were also 35 suicides among former inmates. Overall, that risk was not higher-than-normal — but former inmates who were white or had been homeless before jail were at heightened suicide risk.

According to Lim’s team, the findings highlight a need for more mental health and drug treatment programs in jails, and outside of them.

Since some people are in the jail system for a matter of days or less, it can be challenging to do a lot for them. But Rich said that with enough resources, even people who pass quickly through the system can be helped.

You can sit down with someone and pretty quickly see if they have an opiate addiction,” Rich said.

Screening people for drug dependence and giving them information on treatment is at least a step in the right direction,” he noted.

According to the New York City Department of Health, Discharge planning efforts occur for persons with both mental illnesses and substance abuse disorders and specifically address linking inmates with care in the community, which they then have the option to access.”

Upon release, all inmates receive our overdose prevention education materials,” according to a department spokesperson. More studies are needed to assess the impact of counseling and treatment on mortality risk and the association of homicide with drug sale/purchase.”

Ultimately, Rich argued, the best course will be to get more of those people into treatment, rather than a longer stint in jail. The answer is to figure out how we can stop incarcerating so many people.”