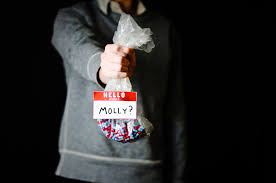 “Molly” is one of the newest designer drugs taking the club scene by storm.

But why is it so popular?

“Because of the high it gives you. It’s an intense high. You’re very happy, excited you know. It’s just a really great feeling,” a man who called himself James told NBC 10.

James, who lives in Pawtucket, is currently in rehab for drug addiction. He said his choice of drug was “molly,” which colloquially refers to MDMA or ecstasy in powder or crystalline form.

“I was looking for ecstasy and they tell me we have a new form of ecstasy. You know it’s just MDMA. It’s more powerful. Why don’t you try this? That’s how I started,” he said.

But James warns after the high, you crash hard.

“Afterward you feel real dirty. You feel real dirty, tired and worn out. Coming off of it, it’s no joke also. You have sweats especially when you’re doing it. The dehydration is insane,” he said.

And do things you normally wouldn’t do.

“My wake up moment was when I found myself selling my little boys’ video games to support the habit,” James said.

James said he’s trying to kick the habit at the SSTAR addiction treatment center in North Kingstown and working with counselors like Becky Chartier.

“We’re seeing an increase in it in our younger population, certainly,” Chartier said. “It’s an experimental drug, definitely.”

Olivia Rotondo, 20, of Providence, was taken to the hospital and later died Saturday after attending a New York City dance music festival. City officials say her death appeared to have been linked to drugs, specifically ecstasy.

Chartier said there have been other deaths in Rhode Island, which is not a surprise when you know what’s in the white powder.

“Our patients tell us they mix it with popular drugs like cocaine and heroin, in addition to things like rat poisoning,” she said.

Besides death, side effects include overheating, high blood pressure, and short term psychosis.

They are side effects James never thought of, especially when he heard it touted by movie stars and musicians.

“It’s really irresponsible of the record labels, the singers themselves. It’s such a dangerous drug. I’m petrified of one of my children ever getting a hold of that it’s that dangerous,” he said.