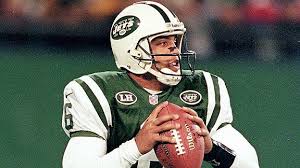 As a former NFL quarterback, Ray Lucas was used to having a plan and carrying it out.

A few years ago, this was his plan: He would wait for a Sunday morning while his wife and daughters went to church, then drive to the George Washington Bridge, crank the wheel over and drive off the side.

“Until very recently, I was making plans to end it,” Lucas says in the first episode of “Casualties of the Gridiron” an online documentary series from GQ that goes live Monday morning on video.GQ.com and the GQ Youtube channel.

That emotional gut punch is just one of many in the eight episodes of about 10 minutes each. New episodes will come out every Monday and Thursday before the series wraps on Dec. 18.

“It’s very haunting. I think after you watch an episode, it really stays with you,” said Dawn Ostroff, the President of Conde Nast Entertainment. “My hope is that people will see it so they can feel compassion in their hearts for what these men were going through.”

Isaac Solotaroff is the documentary’s director and executive producer, with co-director Jesse Handsher and executive producer Jennifer Smith. Among the difficult moments they captured is when former linebacker Terry Tautolo finds himself in an old 49ers team photo, pointing out Joe Montana and Ronnie Lott before he identifies himself. Then he explains how he found himself homeless.

His former UCLA teammate from the 1970s, Brent Boyd, makes an appearance in archival footage testifying before Congress. Then he’s right there on camera, explaining how his life might have turned out different if he knew then what he knows now.

“I graduated UCLA with honors and was accepted to law school,” Boyd said. “But my dream had always been to be an NFL player.”

The next time we see him, he’s with a clinician, struggling to name more than a half-dozen or so words that begin with the letter B. Boyd then explains that he has moved in with his 24-year-old son.

The series shows plenty of moments of hope, too. Jen Smith is a constant presence as the do-it-all director of player programs for PAST, an organization that helps former players get treatment for physical and mental issues, manage pain and addiction, and generally improve their quality of life.

She was the one Lucas reached out to when he was contemplating suicide.

Smith said in an interview with The Associated Press that she picked up the phone one summer day and heard “My name is Ray Lucas. Somebody gave me your phone number, and I’m going to drive off the George Washington Bridge on Sunday.”

Smith, who has been working with former NFL players for years, said that suicidal thoughts and tendencies are more common than not among former players. As is addiction, which frequently happens when players without insurance turn to pills to manage chronic pain issues.

She got Lucas the help he needed, and now he’s working side by side with her at PAST, which stands for Pain Alternatives, Solutions and Treatments, where former players gather once a month or so to discuss their issues among each other.

“Peer group kind of gives them an avenue of speaking the truth, speaking from the heart, and not worrying,” Lucas said. “Every time that I’ve had a peer group with these guys, I’ve taken something out of it for myself. You can call it the word ‘sharing’ so to speak. They’re not going to be judged.”

Lucas often runs these sessions himself. He gets as much help out of it as anyone, and it seems apparent in the footage of him and Smith helping other players out with their problems.

As encouraging as some of these moments can be, there’s always another reminder that there are more players out there in need of help.

“I think what this show is designed to do is to provide a real-life glimpse into this,” Smith said. “While this is challenging and hard, there’s some hope and some positives that are in all this. I think it’s important for the public to see this.” Article Link…