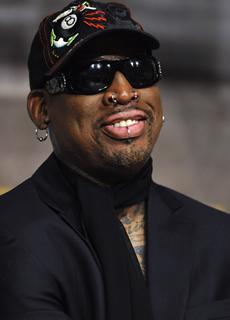 That was one of many quotes Dennis Rodman provided in a Today Show interview to suppress reports that he has lost millions and is seriously struggling with his health.

Rodman’s lawyer claimed he was “broke” and “extremely sick” in court papers filed for spousal and child support payments.The Los Angeles Times reported that Rodman owed $808,935 in support for the two children he had with his third wife,Michelle Rodman. He also reportedly owes $51,441 in spousal support.

“Yeah, I pay child support. I’m not one of the guys that made Michael Jordan money or Scottie Pippen money. I made a decent living in the NBA, but broke? I’m not broke,” Rodman said in the interview.

He also denied being sick, although his financial adviser Peggy Williams said he is battling alcoholism and he is getting “increasingly worse.”

“I’m not sick, man. People have had those allegations about me since 1995. ‘Dennis parties a lot, Dennis does this.’ I’m going to do what I do. I’ve proved people wrong from day one, I’m still proving people wrong that the fact that I’m still loving it…I feel good. I’m 50 years old, I do go out and have a good time, and most of the things I do is based on appearances around the world.”

When asked if he was worried about suffering the same fate asWhitney Houston or Amy Winehouse because of his partying ways, Rodman said no because he doesn’t use cocaine. “I never even came near cocaine,” he said.