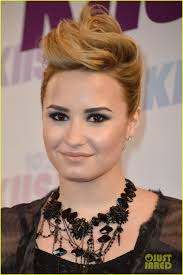 Demi Lovato is healthy and happy these days, but just three years ago, she was in rehab to treat her longtime eating disorders, self-cutting, and drug and alcohol addictions. Looking back, she’s amazed at the progress she has made.

“When I was in treatment, I honestly thought my career was over,” Lovato told EW Nov. 14. “But when I came out of treatment, I had more supportive fans than ever.”

Demi, 21, opens up about her struggles with anorexia, bulimia, cutting, and her addictions to drugs and alcohol in her new memoir, “Staying Strong: 365 Days a Year.”

The 5-foot-2 Lovato, who once starved herself down to 82 pounds, still struggles with addiction and negative thoughts, but has gotten better at coping with them. She said she decided to go public with her problems to help other people who might be suffering in silence.

“I’ve been very honest, but if people really knew how dark and deep my struggles got — not just with my eating disorder, but with drugs and alcohol — they’d be really shocked. Maybe it’ll help other people in the industry who are headed down the wrong path.”

Lovato, who said most of her friends abandoned herwhen she went to rehab from October 2010 to January 2011, wants to be a positive role model for her young fans.

While other young celebrities such as Miley Cyrus have no interest in accepting the burdens of being a role model, Demi embraces the responsibility.

“I used to say that too [that I never asked to be a role model]. That was my excuse to do whatever the f–k I wanted and not give a sh-t about what other people thought. Then I ended up going through some stuff. I realized I’m never going to escape the fact that I’m in the public eye, so I might as well do the best I can.” Read More…