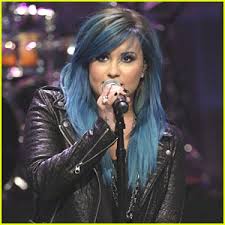 Demi Lovato knows she can’t smoke or drink without getting out of control.

The 21-year-old singer – who has previously been in rehab for addiction issues, an eating disorder and self-harm – admits she knows she can no longer indulge in alcohol in a ”responsible” way.

She said: ”Some people can smoke and drink recreationally. I’m not one of those people. If I do that, it will spiral out of control very quickly. I’ve lost the privilege of being able to drink responsibly.”

The ‘X Factor’ USA judge admits it was difficult to stay sober when her father died earlier this year, but she knew how important it was to stay ”strong” as giving in to one addiction would only spell more problems.

Speaking to OK! magazine, she said: ”I’ve definitely struggled a lot with drug and alcohol addictions – even more than with my eating disorder.

”But I decided to stay strong when my father died. I worked so hard on my sobriety – I wasn’t going to give it up. When I feel like I want to give up I think to myself, ‘No, what about the 17-year-old girl that’s been free of self-harming for nine months?’ If I give up my sobriety, that would mean it would be OK for her to go back to self-harming.” Article Link…