You know his face from The Dark Knight and the upcoming Ant Man but David Dastmalchian’s heart is bared in his new film, Animals. 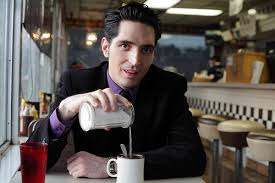 Now, he’s a big-time actor, but in 2002, David Dastmalchian was living out of his car, shooting heroin. Though his best-known role is as the Joker’s henchman in The Dark Knight, recently he starred in and wrote something more of interest to readers of The Fix. Animals, a tale of two heroin addicts in love, is partially based on Dastmalchian’s own experience. The struggling characters, Jude and Bobbie, spend their days pulling off scams for drug money and their nights sleeping in their car parked near the Lincoln Park Zoo. The film debuted on May 15, andThe Fix ran a review of it the same day. This week, Dastmalchian made the time to talk about his film, his recovery, and his life. (Note: This interview has been condensed in places.)

So first, let’s start with the easy stuff—how do you say your name?

The trick is to imagine that you have a small chin and you’re saying “this small chin.”

You may have seen it, but we just reviewed Animals.

Yeah, today we posted Richard Roeper’s big review and that was exciting. I think we’re going to put up The Fix one this afternoon. It meant a lot to me, in particular, just because I know I read The Fix and I think it’s just, it’s been tough, to be quite honest, and terrifying to figure out where I feel comfortable talking about my history and at what points I feel comfortable breaking my anonymity or my family’s anonymity while at the same time wanting to be as open as I can about the film because I’m 13 years into my recovery. I think people can spend their whole lives fiercely guarding their anonymity. Because it’s such a personal nature connected to the film itself, it has been 90% of the time, really rewarding for me to be as open as I’ve been able to be about the fact that I was an addict.

What has come down as criticism … was one radio host who felt like certain details were “embellished.” I didn’t want to get into it but I wanted to pick up the phone and call up the station and be like, “That literally happened to me!” I’d say 98% of the response from the recovery community has been so positive. There’s been a couple of painful things to read. That’s the danger of things like social media … it’s a subject matter that is so fundamental to who I am as a human being, my recovery as an addict. As an actor, I’ve been doing this for a long time and I don’t even read what people say about me. They can attack my acting but it’s not so deep to the bone as the other stuff. It’s been an incredible ride, not without its bumps, but it’s been an incredible ride.

If anybody in recovery watches this film and feels that I’ve exploited something for some reason, they’re entitled to their opinion. There’s nothing that I can do other than feel really sad about it. I didn’t make the film to make it a “recovery film.” I didn’t want to make a message film because I still don’t even know what the message is. I feel like addiction is such a complicated and complex issue that the only message I’ve got is that we’ve got to stop giving up on people.

How much is the male lead actually based on you?

Both of the main characters are based on, inspired by—god, every character that I ever write is somehow based on me. What I was trying to convey with Jude was somebody who probably could really be an amazing lawyer or doctor … I think I wrote him a lot smarter than I am. And Bobbie is a lot like me in that her journey in addiction ultimately led [to] the same trajectory that mine did.

I was homeless because of the heroin. I didn’t pull off as intricate of scams as Jude and Bobbie—like the date scam was actually some friends of mine that I shot up with sometimes. That was absolutely something that I used to watch this couple do. I lived in a car on and off for almost two years. And then a lot of my journey as an addict, for me, Chicago was the backdrop for my journey.

As we tell the story, people who watch it see how much pain people go through even at their worst. I never knew an addict that was giggling when they were preparing to pull off a robbery or a scam. I never knew an addict that was enjoying a single moment of that. I hope you see that with Jude and Bobbie and I hope people feel their humanity and don’t look at them as criminals, they look at them as their kids, their siblings, their neighbors.

You ended up in a hospital like Jude, right?

In real life, it happened to me twice. That’s another thing about the movie, an addict’s journey can be difficult to portray in cinema because it took me so many tries to get clean. I was never taken directly to a detox or rehab, I was taken directly to a psych ward. I’m also a dual diagnosis—I deal with depression too, and other psych issues. I had made an attempt on my life which had landed me in a hospital but because I didn’t have insurance I was transferred to a psych facility where I spent a month, month and a half. That was a necessary experience for me. It was hell at the time. I was quite literally strapped to a bed and given Motrin.

It was a state-run facility so their resources were pretty scant but they were wonderful. From there, I was able to reconnect with my family. I went to treatment, got out, tried sober living, started to think I could drink again … and it was weeks before I was making eight-hour drives to score dope again. Then it took me another six to eight months of being back out again, maybe over a year of just going really hardcore. Then I got really sick from both infection and dirty using practices and I knew I was going to die. I had that desire to live and I wound up back in the mental hospital again, but this time things changed for me. I can only describe it as a miracle that my family was still there to love and support me when I was ready to ask for help.

I personally utilized, with the doctor’s care, a very specific and well-planned maintenance program with methadone to come down off of dope. I know that’s such a hot-button issue and it’s tricky for me when addicts ask me if I used methadone. I feel like it’s such an abused medication. I mean, I’m not ashamed of the fact that I used methadone, because, you know, there’s a lot of shaming of methadone. It was part of my replacement therapy—meetings, medication, exercise. Read more “the fix”…