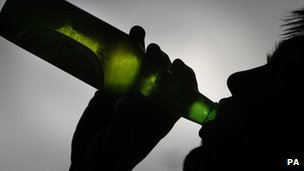 Children as young as 10 are more familiar with some alcohol brands and adverts than those for popular foods and snacks, research shows.

The Alcohol Concern survey of 401 children found twice as many children recognised Carlsberg as an alcoholic brand than Mr Kipling cakes as foods.

The campaigning group said it showed the power of marketing, prompting it to renew its call for tougher rules.

But ministers and the industry said the current regulations were strong enough.

The research forms part of the group’s long-running campaign to get the UK to follow the lead of France when it comes to regulating the advertising of alcohol.

Mark Leyshon, from Alcohol Concern, said: “Research shows that children who are exposed to alcohol advertising and promotion are more likely to start to use alcohol, have positive expectations about alcohol, and to drink more if they are already using alcohol.

However, the group admitted alcohol awareness could also be influenced by seeing parents and friends drinking as well as marketing.

The research – carried out with 10- and 11-year-olds in Wales – found 79% of children recognised Carlsberg as an alcoholic drink, compared to 74% who knew Ben and Jerry’s produced ice creams and 41% who recognised Mr Kipling as a food producer.

Eight in 10 also recognised the Smirnoff vodka label as an alcohol product.

Meanwhile, three-quarters of children associated the image of fictional characters Brad and Dan from a Fosters advert with alcohol, compared to 42% who recognised Cadbury’s drumming gorilla was for a food product.

A spokesman for the Department of Culture, Media and Sport said there were already rules in place which prevented alcohol marketing being targeted at children.

But he added: “We will continue to monitor the effectiveness of the UK’s regulatory regimes to ensure that there is sufficient protection for the public, particularly children and young people, including the regulation of new digital media.”

Henry Ashworth, chief executive of the Portman Group, which represents the drinks industry, dismissed the findings, saying there were already strict rules in place that were being “rigorously enforced”.