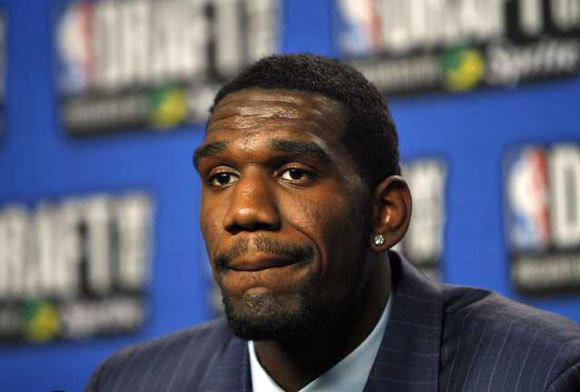 Greg Oden, the former No. 1 overall pick whose career was derailed by injuries, says he basically became an alcoholic by his second season in the NBA, during an interview with Mark Titus, Oden’s former teammate at Ohio State.

Oden, who was drafted by Portland with the first overall pick of the 2007 draft, puts some of the blame for his alcoholism on one of his cousins, who came to live with him during his second season with the Trail Blazers. His cousin was in the Air Force.

“If you know anything about guys in the Air Force, it’s that they drink a ton,” Oden said. “My cousin got wrapped up in it too. When I played well, I’d drink to celebrate. And when I played poorly, I’d drink to forget. That second year in Portland I pretty much became an alcoholic.”

Oden was released by the Trail Blazers on March 15 after playing in only 82 games in his career.

“That’s the worst part about all of the injuries and the criticism,” Oden said. “It would be one thing if I had been healthy for five years and just sucked when I was on the court. But I can’t prove what I can do because I can’t stay healthy. Not having control over the situation makes it tough.”

Oden says he plans to sit out next season and try to return in the 2013-14 season at full health.

“I don’t care about what all of these injuries mean for any legacy I might have,” he said. “I just want to play basketball. I could’ve signed with a team after Portland cut me and just sat on the bench and collected paychecks, but that’s not my style. That just seems really unethical. Besides, money doesn’t matter to me. I’ve got enough money. All I want is to get 100% healthy and get back on the court.”