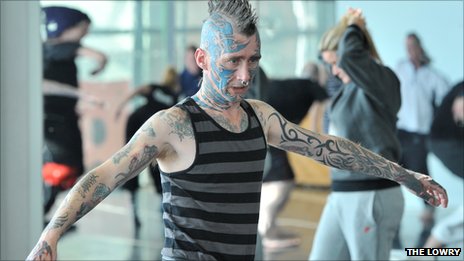 “I keep my feet planted and remember where I have come from – I try not to live in the past, but I don’t want to shut the door on it either.”

There are echoes of Billy Elliot in the way John Horton describes his move into ballet.

Yet one major difference casts the fiction and fact wide apart; John’s journey to the stage started with a battle against severe drug addiction.

He is one of several former addicts performing with Chester’s Fallen Angels Dance Theatre.

It was created to help vulnerable young people and adults who have experienced drug addiction and alcoholism.

For John, it has done exactly that.

He says he was introduced to cannabis and amphetamines when he was about 14 and quickly moved on to crack cocaine and heroin.

“I used heroin for about 10 years – two of which were enjoyable and eight were a nightmare.

“I ended up in prison and I just thought something needs to change, I need some structure and support when I get out.

“I was lucky enough to find Fallen Angels and since then, I’ve met friends and I’ve been coming to theatre.

He says that the positivity he now feels about his life is a stark contrast to the way he was only a few years ago.

“I was scared to death of life. I was scared to go out of the house, so the thought of standing on stage and talking to people, sharing my experiences and hopes… I’d have run a mile.

“I still get fears, but it’s nothing like it was – I know it can be overcome.”

It is not just the experience of being on stage that has changed John’s life, though.

For John, being involved with the company, which sees the former addicts working with professional dancers in rigorous training, has also given him back things that most people would take for granted.

“It’s like when I go to bed, I’m asleep within five minutes – it’s great.

“And then I wake up and I can appreciate the day for what it is.”

He says the idea for it came out of his work at a drug rehabilitation centre and that it has been better than he could ever have hoped for.

“I was dancing for 12 years professionally and I’ve never had an experience like this.

“Some people said to me they were more scared of doing dance than they were of their heroin detox.

“But a lot of recovery is about taking risks and letting go of old ideas and behaviour.”

He says he hopes that the troupe will be “inspirations for the next people coming through”, but that it is also good simply to watch the current dancers enjoy themselves.

“It’s small steps – they’re not going to make professional dancers, but they are fantastic role models.

“Watching them light up on stage is really powerful. It’s a big thing for them just to do that, so watching them achieve that is amazing.”