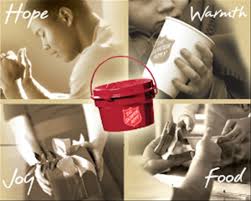 Most people recognize the signage. The red shield with white writing symbolizes the charitable organization that takes used  items and sells them to the local community at minimal cost.

Even more familiar may be the red kettle bell rung during the holidays. However, not many are aware The Salvation Army has a program that rehabilitates those suffering from drug addiction and alcohol dependency.

Salvation Army Maj. Henry Graciani said that donating and shopping with The Salvation Army helps them honor their slogan in “doing the most good,’ including fund programs like its Adult Rehabilitation Center.

The program supports 130 men and women at a time in recovery in San Diego County providing a free six-month recovery in a residential facility.

“It helps men and women get back on their feet,” Graciani said. “It’s made possible because of the generosity of San Diegans.”

Graciani said the people who enter the program have made bad choices in life but want and need a second chance.

“I often call our facilities God’s workshop to mend the miracles that have been broken,” Graciani said. “You’re not just ringing up clothing, you’re putting a thumbprint on lives.”

Graciani said the only thing a participant needs is to be willing.

As many as 70 percent of those in the program are self-referred, while the other 30 percent are court ordered.

Graciani said while on average it takes those in recovery seven relapses to ultimately remain sober, the organization never gives up on those who leave.

Participants range in age from 18 to 65 and are given tools such as counseling and substance abuse education, anger management, work therapy, chapel services and re-entry and alumni support.

Salvation Army Point Loma store manager James Durland has worked for the organization more than three years. He started off as a clerk and has worked at four of the stores, including as an assistant manger in Chula Vista. Read More…