In the latest sign of how entrenched the nation’s epidemic of painkiller misuse has become, people are also abusing treatments meant to cure their addiction.

Titan Pharmaceuticals Inc. plans to file for Food and Drug Administration approval in September for a matchstick-size implant of buprenorphine, a drug that eases withdrawal symptoms. Current versions of the drug normally come in a pill or strip, but many are being diverted to the black market and taken to get high, because they contain small amounts of opioids, or used more heavily by addicts than they should be to relieve withdrawal symptoms, according to Titan as well as law enforcement officials. 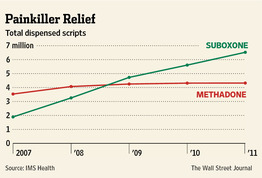 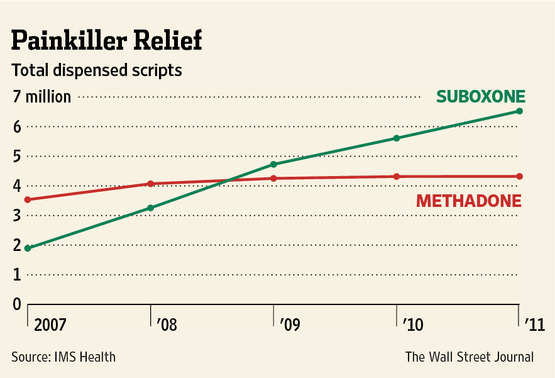 Buprenorphine is abused by injecting or snorting crushed tablets, according to the Center for Substance Abuse Research at the University of Maryland, the same methods addicts use to get high from oxycodone or any other powerful painkiller.

The San Francisco-based biopharmaceutical company is hoping to cut down on abuse of buprenorphine by offering the implant—called Probuphine—which is inserted just under the skin in the upper arm and releases continuous, small doses of the drug over a six-month period. “You cannot easily remove these implants from the arm,” said Katherine L. Beebe, a senior vice president with Titan.

Drugs like buprenorphine are on the market in ever greater quantities to help combat a growing epidemic of painkiller abuse. Pharmacies dispensed enough painkillers last year to keep every American adult medicated around the clock for a month, according to the federal Centers for Disease Control and Prevention. An estimated two million Americans are addicted to the prescription opioids. Of that number, 800,000 are currently receiving treatment, Titan said.

Methadone, another drug used to treat addiction, now causes 30% of prescription painkiller deaths, putting it second behind painkilling drugs containing oxycodone, according to the CDC.

Doctors normally use the slow-release drugs to wean addicts off heroin or powerful narcotic painkillers. Use of methadone is heavily restricted and the drug is commonly dispensed on-site at treatment centers in daily doses. But some doctors are now also prescribing methadone, which contains small amounts of opioids, to treat chronic problems like back pain, a practice that has made the drug more widely available and helped it make its way onto the black market.

Some health plans rate methadone as a preferred drug over oxycodone for treating some chronic pain because it is often just a quarter of the cost for other extended-relief painkillers.

Methadone can be deadly because unlike painkilling drugs like OxyContin its contents tend to build up in the body, Dr. Frieden said. Taking the drug more than three times a day can dangerously slow breathing, according to the CDC.

Addiction doctors say that buprenorphine is bought off the black market just as commonly for legitimate needs as it is for nonmedical use. Stuart Gitlow, acting president of the American Society of Addiction Medicine, said that in order to prescribe Suboxone, the brand name for the best-selling version of buprenorphine, he is limited by Drug Enforcement Administration rules to treating 100 patients, even though he has a waiting list for the drug about the same size.

“The number of patients coming in who are new to Suboxone is very low now. Most everybody has started it on the street,” said Dr. Gitlow, whose practice is in Woonsocket, R.I.

Titan Pharmaceuticals said its aim is to help fill the demand for legitimate need of buprenorphine that the current supplies of pills and patches cannot meet. The company published the results of its clinical study of its implant in the Journal of the American Medical Association in 2010. The 163-patient trial found that users of the implant had “significantly” less illicit opioid use and fewer symptoms of withdrawal and craving. “There are just a lot more people who need treatment than who are getting access now,” said Titan President Sunil Bhonsle.

Suboxone, made by U.K.-based Reckitt Benckiser Group RB.LN +0.80% PLC, was approved by the FDA in 2002. It was the first narcotic drug doctors were able to prescribe from their offices for opioid addiction. Sales rose 18% in 2011 to $1.3 billion from $1.1 billion in 2010, according to IMS Health Inc., which tracks prescription drug sales.

Reckitt Benckiser declined to make an executive available for comment Tuesday or Wednesday.

In Kentucky, law enforcement and community groups say the number of Suboxone investigations are approaching those for oxycodone or hydrocodone.

The estimated number of drugs or paraphernalia containing buprenorphine analyzed by state and local forensic law enforcement jumped to 10,537 in 2010 from 90 in 2003, according to an April report by the Center for Substance Abuse Research.