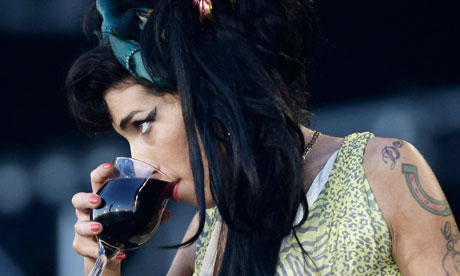 Poor Amy Winehouse. She was certainly a victim of her fame, which attracted both oppressive media attention and “hangers-on” who told her what she wanted to hear. But she was also, more simply, a victim of a not-uncommon mental illness – addiction – that is poorly understood and claims many non-celebrity victims, too.

Even before Winehouse had been buried, there were tabloid reports of a trip to a drug dealer on the evening that she died. What pernicious lies people make up and peddle; there were no illegal substances in the singer’s body that night. Today, however, it was confirmed that Winehouse’s death was caused by the vast amount of vodka she had consumed.

Winehouse’s last concert before her death had been a shambling and shameful affair, which saw her step onto a stage too drunk to stand. So it is no surprise that alcohol binges still featured in her life after a “successful” stint being treated for “drug addiction”. It’s a silly idea, that “drug addiction” is somehow a different thing to “alcohol addiction”. The problem is addiction, and the idea that an abusive relationship with legal alcohol is of a lesser order than an abusive relationship with illegal drugs, is one of those fake distinctions that would be pitiful if it wasn’t so dangerous.

Winehouse’s parents, in the wake of her death, said how proud they had been that she had beaten drugs. Though worried by her less decisive break with alcohol, they did not seem aware that continued use was every bit as perilous as her use of drugs had been before she accepted the need for intervention. Who can blame them, when the wider culture is so geared to believing that drugs are killers, to be banned, while alcohol is a necessity at any social gathering?

Mind-altering substances are no more dangerous to some people than flower arrangements. Other people can build addictive behaviour around the food that they eat, or the idea that they might not have switched off the gas ring before leaving the house. It’s all a threat to those who are susceptible, a threat to quality of life if not to life itself. The misunderstanding of addictive illness can nevertheless sometimes seem willful.

When my husband accepted his addiction and gave up drugs and alcohol 12 years ago, no one ever suggested to him that just one little line of coke would do no harm. But I lost count of the intelligent friends who asked him in those difficult early years: “Still not drinking?” Such a stupid, insensitive question. So unhelpful.

It is asked because people don’t really believe that alcohol is deadly to the addict. “Drug addict” is a fearful term. “Alcoholic” is quite often used capriciously, to denote that a person drinks a lot. But “an alcoholic” is just a particular subset of drug addict, addicted to a particular drug. Alcohol’s legality does not make it any more safe for people who have the illness. It does, however, make it harder for the addict to absent herself from temptation, or avoid the ignorant pressure of others to join them, because, say, “it’s my birthday”.