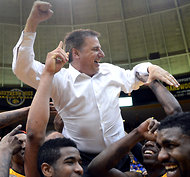 Coach Larry Eustachy, now nine years sober, makes a comeback after years of consequences from his alcoholism.  Here is his inspiring story.

PITTSBURGH — Technically, Southern Mississippi’s Larry Eustachy is not one of the first-time coaches in the N.C.A.A. tournament. Eustachy has actually been to the tournament three times before, including in 2000 when he led Iowa State to a 32-5 record and the Round of 8, and was named the national coach of the year by The Associated Press.

But all that came before: before the photos of Eustachy drinking with students, before the humiliation of his ouster in Ames, before his marriage crumbled. Before Eustachy, who used to regularly down a screwdriver cocktail after giving a postgame locker room speech, finally confronted his demons.

The time line is stark: On April 28, 2003, The Des Moines Register published photographs taken that year of Eustachy, then 47, partying with students near Missouri’s campus after the Cyclones had lost to the Tigers. On April 30, Eustachy was suspended by the university. On May 6, he resigned, his career suddenly in shambles.

“There’s nobody that’s got more scars on their fanny than me,” Eustachy said Wednesday.

Since leaving Iowa State, he has been treated for alcoholism. He remarried. He returned to coaching, taking a job at a university in the heart of football country, which had last played in the N.C.A.A. tournament in 1991 and, for several years, had Eustachy working from an office inside a trailer.

He has also rededicated himself, to his family, his work and his sobriety, which is at nine years and counting. He drinks Diet Coke now, chugging can after can during games from a cooler stashed behind his team’s bench. For fun, he likes to go fishing.

Texas-El Paso Coach Tim Floyd, one of Eustachy’s closest friends, recalled trying to talk to him about his drinking more than 10 years ago.

“I could see it coming, the road he was on,” Floyd said this week. “But he was winning, he was having success. He didn’t want to hear it then.”

Eustachy needed to experience the sting of embarrassment. And now that Eustachy has come back after losing everything, Floyd said he had never been prouder of a friend.

“I don’t know that there’s a coach in this field that will appreciate it more than Larry will,” Floyd said, “and I’ll be honest: I don’t know if there’s a better story in the entire tournament than this one.”

On his way to New Orleans in March 2004, Richard Giannini, then the athletic director at Southern Miss and part of the search committee for a basketball coach, was anxious about meeting Eustachy.

He had good reason. For a university like Southern Miss, hiring a coach with Eustachy’s résumé, including six conference titles, would have ordinarily been unlikely, if not outright impossible.

But Giannini had seen the pictures. He had read the stories. He knew about Eustachy’s stint in a Minnesota rehabilitation facility. And, even more, Giannini had seen up close the constant challenges that seep into an alcoholic’s life.

“My wife is a recovering alcoholic and has been sober for over 26 years,” he said in a telephone interview this week. “My wife has a great program and really worked it hard. And I saw over that period of time what it took.”

Giannini had heard supportive reviews of Eustachy’s character from the athletic directors at Idaho and Utah State, where Eustachy had worked previously, and he had also taken a call from Floyd, whose father coached at Southern Miss and whose family is embedded in Hattiesburg. Still, until Giannini sat with Eustachy, he remained unsure.

“I discussed the issues he had at his previous position and we talked about his alcohol issues and a lot of those things,” Giannini said. “He was open, he was honest. He did not make excuses.”