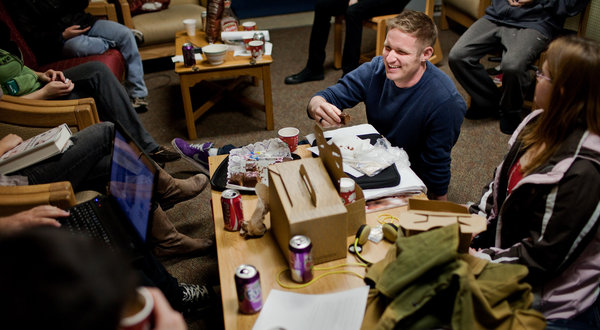 As universities begin to offer more options for recovering alcoholics and addicts, a new generation of students discover ways to combat the stresses and triggers of college life.

In their undergrad uniforms of fleece and sweats, a clutch of Rutgers students gathered on the worn red couches of their dorm’s common room and told their stories. A good-looking, fun-loving 23-year-old named Greg described arriving at college freshman year with a daily pot-smoking habit and a close relationship with alcohol. He soon followed the lead of his alcoholic father and was binge drinking (five drinks or more in a row). “It was pretty scary,” he said.

For his self-diagnosed anxiety and depression, he secretly began taking Klonopin, which he bought from another student. By sophomore year, he was taking six a day. And when it ran out, he wound up in a hospital to manage withdrawal, followed by nine months of rehab.

Unlike the other students on the couch, Devin Fox, 26, gave permission to use his surname because of his career choice. He is pursuing a graduate degree in social work, hoping to work at a policy level in the mental illness field. Mr. Fox had been so despondent over his addiction to methamphetamine that he tried to overdose. Like Greg, he is now three years clean.

The students live in one of two recovery dorms tucked away in anonymity on the sprawling New Brunswick, N.J., campus. In 1988, Rutgers started what is believed to be the first residential recovery program on a college campus, according to Lisa Laitman, director of its Alcohol and Other Drug Assistance Program. She helped create the program after seeing students struggle to abstain as dorm-mates partied.

Back then, there was little talk about helping students transition to college after treatment for their drug and alcohol problems. Even in 2002, when the nonprofit Association of Recovery Schools was formed, only four colleges joined. But over the past several years recovery programs have been popping up at colleges, large and small, public and private. Now there are more than 20 programs, with more in the pipeline. Texas Tech University has used some $900,000 in federal grants to help campuses build programs.